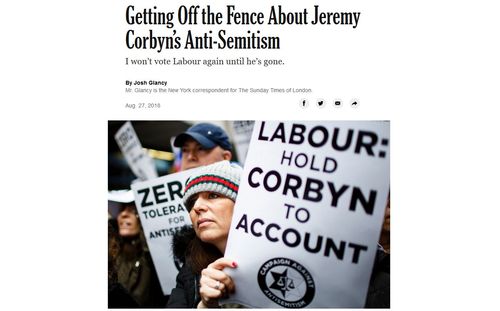 NYT: Why Virginia Woolf Is to Blame for Jeremy Corbyn's Anti-Semitism

From British Religion in Numbers on the 2017 UK general election:

Muslims voted overwhelmingly for Labour, with 85% having preferred for Jeremy Corbyn’s party, and 11% supported the Conservatives. Majorities, albeit somewhat reduced, voted Labour at the 2005-2015 general elections.

These trends are hardly surprising given that it makes electoral sense for Labour to appeal to the growing Muslim share of the electorate as it discards its socially conservative working class base. Thus Jeremy Corbyn has a whole bunch of friends who don’t much like Israel or Israel’s co-ethnics abroad:

On the other hand, that’s not really Corbyn, it’s Tracey Ullman. For several years, lots of people have been trying to find the smoking gun on Corbyn himself, with notably little success. Now, on the NYT Opinion page:

Getting Off the Fence About Jeremy Corbyn’s Anti-Semitism
I won’t vote Labour again until he’s gone.

By Josh Glancy
Mr. Glancy is the New York correspondent for The Sunday Times of London.

… Last week, a British newspaper published a video showing Labour’s leader, Jeremy Corbyn, making comments about Zionists that have been condemned as anti-Semitic. …

Then, last Thursday, The Daily Mail released a video of Mr. Corbyn speaking at a 2013 conference in London about Britain’s legacy in Palestine.

… While bemoaning the activities of a group of Zionists, he identified two problems. “One is that they don’t want to study history, and secondly, having lived in this country for a very long time, probably all their lives, they don’t understand English irony either,” he said. “I think they need two lessons, which we can help them with.”

There’s been some debate over whether he was berating just that particular group of Zionists or Zionists in general. Mr. Corbyn, in a limp effort at explaining himself, has stated that he “described those pro-Israel activists as Zionists in the accurate political sense, not as a euphemism for the Jewish people.”

This is, to put it in British, utter tosh.

This was classic anti-Semitism. Here were a group of Jews with whom Mr. Corbyn has a political disagreement. And he smeared them not on the basis of that disagreement but on the basis of their ethnicity. He accused them of failing to assimilate English values, of not fitting in, of still being a bit foreign.

Oh boy … No, he was talking about a specific group of Zionists who berated his pal Manuel Hassassian, the semi-official Palestinian Authority diplomatic representative in London. It’s exactly like a Democrat accusing Trumpists like Stephen Miller of wanting to cut back on immigration:

“One is that they don’t want to study history, and secondly, having lived in this country for a very long time, probably all their lives, they don’t understand American diversity and the meaning of the Statue of Liberty either,”

It’s stupid, but it’s Obama Era standard operating procedure to claim that your political opponents are Not Who We Are.

Warning: this smoking gun video is a nothingburger. Here’s the transcript of what Corbyn said:

“The other evening we had a meeting in Parliament in which Manuel made an incredibly powerful and passionate and effective speech about the history of Palestine and the rights of the Palestinian people. This was dutifully recorded by the – the thankfully silent Zionists who were in the audience on that occasion and then came up and berated him afterwards for what he had said. They clearly have two problems: one is they don’t want to study history and secondly having lived in this country for a very long time, probably all their lives, they don’t understand English irony either. Manuel does understand English irony and he uses it very very effectively.”

The NYT / Times of London writer goes on:

Had they been Christian Zionists, he could not have insulted them in this way.

… I’d always thought that if Mr. Corbyn was ever nailed down on this issue, he’d be spouting the anti-Semitism of the international left: Shadowy Zionist lobbyists. Omnipotent Rothschilds. Benjamin Netanyahu glorying in the slaughter of innocent children.

Instead we got something much closer to home. This was the anti-Semitism of Virginia Woolf and Agatha Christie. It was T.S. Eliot’s “lustreless” Bleistein puffing on his cigar and Roald Dahl insisting that “there is a trait in the Jewish character that does provoke animosity.”

By the way, isn’t “Woolf” a Jewish name? Virginia Stephen Woolf didn’t even like boys all that much, but she still married a nice Jewish guy, yet now she’s getting namechecked as one of viruses of anti-Semitism infecting Corbyn?

The comments were more redolent of the genteel Shropshire manor house where Mr. Corbyn was raised than the anticapitalist resistance movements where he forged his reputation.