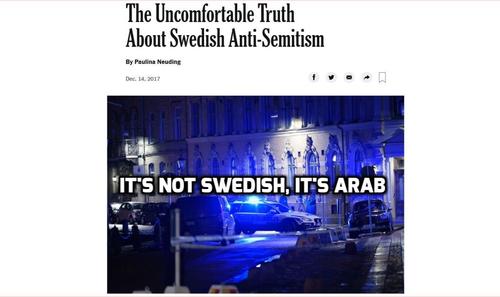 NYT's "Uncomfortable Truth" About "Swedish Anti-Semitism" Is It's Not Swedish, It's Arab

This is pinned Tweet at the top of @PaulinaNeuding's twitter feed, but it's from last year:The Uncomfortable Truth About Swedish Anti-Semitism, By Paulina Neuding, December 14, 2017.

My take on the recent attacks against Jews in Sweden and the wave of anti-Jewish incitement. Sweden's leaders must address the causes of the new anti-Semitism, or this is only going to get worse. My oped in @nytimes : https://t.co/C915B3wenK

I went to the original article, and counted paragraphs, which I do by pasting the whole thing into Word, and making it a numbered list, and it turns out, after seven paragraphs in which there are attacks by "men" with firebombs, a protest by "200 people" against Israel, in which a "speaker" said something anti-Semitic, that it was Arabs all the time.

Do you know when a good time for the New York Times to reveal this fact would be? In the headline, then paragraph one, which contains the first mention of the "men" who did the firebombing. When you conceal these things, you are, in effect, committing a "blood libel" against actual Swedes.