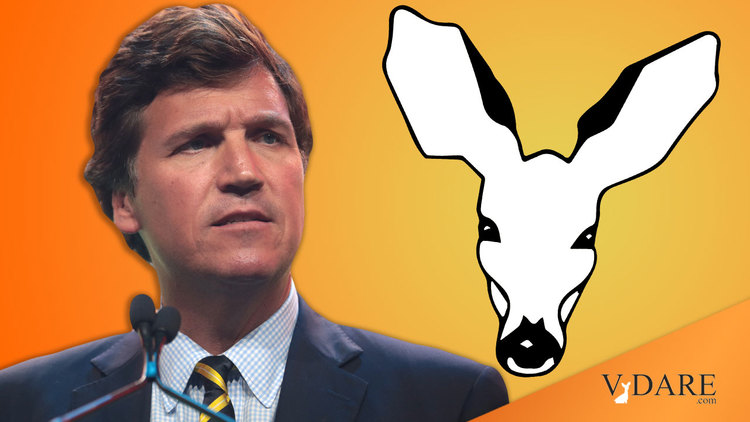 “borrows and sanded down from the far right, are not just, you know, kind of isolated incidents on the show, or things he pops into here, and there. They are a constant theme, a drumbeat spanning hundreds of episodes of the show.”

One thing that particularly annoys Confessore is Noticing the Great Replacement, and saying that “elites in this country are trying to replace Americans with obedient people from what [Carlson] called the Third World.”

Host Dave Davies played a montage of all the times Carlson repeated this unapproved thought:

Tucker Carlson: They can embrace the issues the middle class cares about. Or they can import an entirely new electorate from the third world and change the demographics of the US so completely, they'll never lose again. Democrats know if they import enough new voters, they'll be able to run the country forever. Dramatic demographic change means many Americans don't recognize where they grew up. As with illegal immigration, the long term agenda of refugee resettlement is to bring in future Democratic voters. Illegal Immigrants are the key to their power. The point is to import as many new Democratic voters as possible. The whole point of their immigration policy is to ensure political control replace the populations. This policy is called the great replacement, the replacement of legacy Americans with more obedient people from faraway countries.

And it’s the phrase “Legacy Americans” that particularly irks them. (This means what an earlier generation would have called “regular Americans” and what Peter Brimelow calls the “Historic American Nation”.) [‘Legacy American’ is the latest catchphrase in the racist lexicon, by Tom Mockaitis, The Hill, November 11, 2021]

Dave Davies: Tucker Carlson uses the expression legacy Americans, where does that come from? What does it mean?

Nicholas Confessore: Well, we went and looked, we were like, so where does he get that? Where did that come from? We could find no trace of that phrase, in mainstream media, until he started using it, where we found it was far right sites,  was VDARE, which is a nativist site also popular with white nationalists with some other corners of the internet. He literally plucked that phrase from the racist, right, and started using it on the air on Fox News. And it means what? You know, it's a little bit of code, right? It doesn't explicitly mean, white Americans, although certainly suggest people who are already here right or have been here for some generations. And it harkens back to an earlier era, Carlson's childhood and mine, when America was not just majority white, but disproportionately and overwhelmingly composed of white citizens. So when I hear legacy Americans, I hear a dog whistle. [Emphases added.]

At the time of the 1965 Immigration Act, American was 90 percent white, 10 percent black, and minority. When Confessore refers to Tucker's childhood and his own, this would be the '70s and early '80s—Carlson was born in 1969, Confessore in 1976—and even since then, the demographic change/ Great Replacement is palpable, not a theory, and supported by mainstream Democrats.

Confessore may be right that we were the first user of the phrase "legacy Americans."

I see, using our "exact phrase" search engine, that the phrase "legacy American" or "legacy Americans" was used 46 times, most often by John Derbyshire, who seems to have been the first person to use it here, during the 2016 campaign, in an a column called America’s Four Political Parties—Two Of Them Hopeless Hispandering Hitler-Hysterics.

This debate could accurately be described as a Hispander-a-thon. The moderators were pushing, pushing, pushing for the interests of Latinos over legacy Americans. The candidates, far from pushing back in defense of Anglo-Americans, were pulling where the moderators pushed—helping them promote the narrative, assuring viewers that they were just as enthusiastically on board with the transformation of the U.S.A. into Guatemala North as were the nagging, lisping gringo-haters of Univision.

This excellent piece of rhetoric, by the way, is considerably stronger than anything you're likely to hear on Fox News.

However, even if it's true we used the useful phrase "Legacy Americans" ourselves, it doesn't mean Tucker got it from us. And even if he did, that doesn't mean there's anything wrong with it.

It seems that both "Legacy Americans" and "Great Replacement" represent real things, it's just that Confessore doesn't believe they should be spoken of.