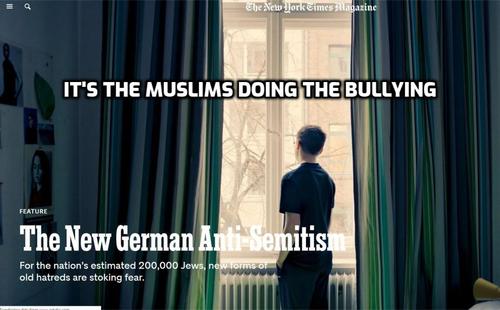 For the nation’s estimated 200,000 Jews, new forms of old hatreds are stoking fears

… Wenzel Michalski is now the director of Human Rights Watch for Germany. He and his wife, Gemma, an outgoing British expat, live in a cavernous apartment building in the west of Berlin. …

Recently, the Michalskis’ youngest son became the third generation of the family to learn that telling people he is Jewish could cause problems. The boy — whose parents asked that he be called by one of his middle names, Solomon, to protect his privacy — had attended a Jewish primary school in Berlin. But he didn’t want to stay in such a homogeneous school for good, so just before he turned 14, he transferred to a public school that was representative of Germany’s new diversity — a place, as Gemma described it, where he “could have friends with names like Hassan and Ahmed.”

… The boy put his arm around Solomon’s shoulders and told him that, though he was a “real babo” — Kurdish slang for “boss” — they couldn’t be friends, because Jews and Muslims could not be friends. The classmate then rattled off a series of anti-Semitic comments, according to Solomon: that Jews were murderers, only interested in money.

Over the next few months, Solomon was bullied in an increasingly aggressive fashion. One day, he returned home with a large bruise from a punch on the back. On another occasion, Solomon was walking home and stopped into a bakery. When he emerged, he found one of his tormentors pointing what looked like a handgun at him. Solomon’s heart raced. The boy pulled the trigger. Click. The gun turned out to be a fake. But it gave Solomon the scare of his life.

When Solomon first told his parents about the bullying, they resolved to turn it into a teaching moment. They arranged to have Wenzel’s father visit the school to share his story about escaping the Gestapo. But the bullying worsened, Gemma told me, and they felt the school did not do nearly enough to confront the problem. The Michalskis went public with their story in 2017, sharing it with media outlets in order to spark what they viewed as a much-needed discussion about anti-Semitism in German schools. Since then, dozens of cases of anti-Semitic bullying in schools have come to light …

For the Michalskis, all this was evidence that German society never truly reckoned with anti-Semitism after the war. Germany had restored synagogues and built memorials to the victims of the Holocaust, Wenzel said: “So for a lot of mainstream, middle-class people, that means: ‘We’ve done it. We dealt with anti-Semitism.’ But nobody really dealt with it within the families. The big, the hard, the painful questions were never asked.” In Wenzel’s view, the Muslim students who tormented his child were acting in an environment that was already suffused with native anti-Semitism. “A lot of conservative politicians now say, ‘Oh, the Muslims are importing their anti-Semitism to our wonderful, anti-anti-Semitic culture,’ ” he said. “That’s bull. They’re trying to politicize this.”

There’s a metaphor, not wholly historically accurate, about the Guns of Singapore: the British built huge harbor guns pointing out to sea to protect Singapore from a naval attack. But then the Japanese army attacked by land.