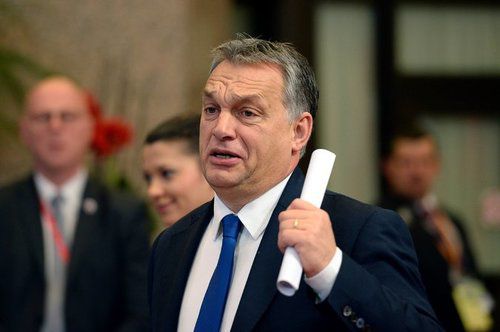 NYT: Hungary's Orban Was Right About Biggest Problem Since WWII, But He Still Has Cooties

From the NYT a couple of weeks ago:

“He is not a good democrat and I don’t believe he is a good person,” said Mr. Konrad, a veteran of communist-era struggles against dictatorship.

All the same, he thinks Mr. Orban, the self-declared scourge of mainstream elites across Europe, was right and Chancellor Angela Merkel of Germany was wrong about how to respond to the chaotic flood of migrants seeking refuge from war and poverty — perhaps Europe’s most serious crisis since World War II.

“It hurts to admit it, but on this point Orban was right,” Mr. Konrad, 82, said, lamenting that in the absence of a joint European effort to control the flow, Hungary was wise to seal its borders and sound the alarm over the perils of allowing hundreds of thousands of migrants, mostly Muslims, to enter Europe willy-nilly.

Quietly, and often with similar misgivings, a growing number of people in Hungary and beyond are wondering whether, despite his shrill and often bigoted message, Mr. Orban had a clearer view of the scale of the migration crisis and its potential hazards than technocrats in Brussels and leaders in Berlin and other European capitals.

In fact, Mr. Orban’s prescriptions — notably the need to secure Greece’s porous coastline and seal Europe’s outer borders — have slowly been embraced by other European Union leaders, who vowed on Thursday, at their final summit meeting of 2015, to “regain control” of the Continent’s frontiers.

Speaking in Brussels at the end of the summit meeting on Friday, Mr. Orban said that “it has taken us a long time” but that there was now “an absolute consensus among the prime ministers on the issue of protection and control of the external borders.” With a big grin, he added, “Actually it was Hungary’s point of view since the beginning that we should start here.”

While repelled by much of the hate-mongering that has accompanied Mr. Orban’s positions, European leaders have nonetheless begun to echo him on many points, albeit without his nasty snarls. …

Peter Szijjarto, Hungary’s foreign minister, said that in his meetings with fellow European ministers the tone had changed drastically since the summer, when Hungary was repeatedly denounced for building a fence to seal off its southern border to migrants hoping to get to Germany.

Fences and other obstacles have since become the norm across much of Europe, with even Sweden, traditionally Europe’s most welcoming country for refugees, announcing tough border controls.

“It is more and more obvious that what we kept on saying for the last six months turned out to be right,” Mr. Szijjarto said in an interview. “This is acknowledged more and more: Some say it openly, some say it behind closed doors and some don’t say it but act accordingly.”

Open support for Mr. Orban and his approach, which has mixed effective practical measures to slow the flow of migrants with bizarre conspiracy theories tinged with racism and anti-Semitism, remains mostly limited to Europe’s political fringe.

On a visit this month to Estonia, for example, Mr. Szijjarto heard lavish praise for his boss, Mr. Orban, from the Conservative People’s Party, a nationalist opposition outfit with a simple message for nonwhite migrants: “If you are black, go back.”

The most that mainstream politicians will say is that “Orban wasn’t completely wrong,” as Reinhold Mitterlehner, Austria’s Conservative vice chancellor, remarked recently.

Officials in Brussels, the headquarters of the European Union, acknowledge in private that Mr. Orban got many things right, but they say that he and his supporters undermined their case with belligerent tirades that variously cast the influx of asylum seekers as a Muslim invasion, a conspiracy by European socialists to import future left-leaning voters and a plot by the Hungarian-born Jewish philanthropist George Soros to undermine European nation states.

Not that Muslims, leftists, and Soros haven’t bragged that that’s indeed what they are, respectively, doing, but it’s considered in bad taste to mention it.

The centerpiece of Europe’s common response to the migrant crisis has been a well-intentioned but so far utterly unworkable plan to spread 160,000 migrants who land in front-line states like Greece around the Continent under a quota system.

Introduced seven months ago with strong backing from Berlin by the European Commission, the union’s executive arm in Brussels, the plan has relocated only 208 people, stirred months of divisive recrimination and left the 28-nation union in disarray. …

The recent disclosure by the Belgian authorities that Salah Abdeslam, a suspected participant in the Nov. 13 Paris attacks, traveled to Hungary to collect two accomplices who entered Europe on the migrant trail has unleashed another burst of “told-you-so” comments in Budapest.

The Hungarian government distorted what happened, claiming against all evidence that the accomplices picked up by Mr. Abdeslam were themselves refugees. But the fact that terrorists appear to have entered Europe concealed among asylum seekers still vindicated repeated warnings by Mr. Orban that the uncontrolled flow of so many people posed serious security risks.

“Whenever Hungary made an argument the response was always: ‘They are stupid Hungarians. They are xenophobes and Nazis,’ ” Zoltan Kovacs, a government spokesman, said. “Suddenly, it turns out that what we said was true. The naïveté of Europe is really quite stunning.”