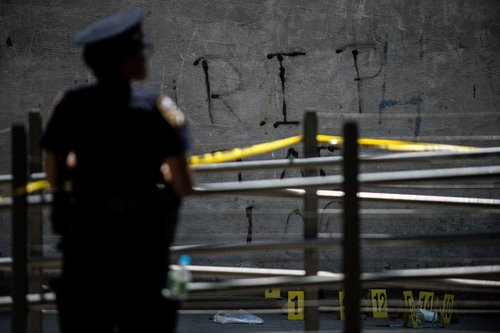 Shootings in New York City have been rising for two straight years, the first time that has happened since the end of the 1990s, when the city was still in the early years of a remarkable downturn in crime.

Homicides by gunfire, seen as a key measure of preventable violence, are up steeply this year. Of the 135 killings through May, 98 involved a gun, up from 69 such killings at this point in 2013 and in 2014. Taken together, the trends raise concern heading into the summer months, when street violence is often most pronounced.

So far this year, there have been 439 shootings, 20 percent higher than the same period in 2013, which was a historically low year. But this year’s figure is still well under the more than 2,000 logged over the same period two decades ago.

For Mayor Bill de Blasio, a Democrat whose efforts to improve police-community relations depend on a force often skeptical of him, increases in violence have reanimated an issue that has stalked him since his campaign for City Hall. The question remains: How to quell gunplay in an era when stop-and-frisk tactics — for years among the Police Department’s principal tools for curbing street violence — are employed far less frequently than before its excessive use came under widespread criticism.

That question has grown more complicated, and urgent, in recent months. Police officers around the country have faced greater scrutiny in the aftermath of police killings of unarmed black men in Missouri, South Carolina, Ohio and elsewhere.

On the presidential campaign trail and at protests nationwide, there have been ever louder calls to end decades of aggressive tactics borne of a time when crime was much higher.

Notice how the New York Times is much more reasonable-minded about the need for law-and-order in New York than in lowly Ferguson, MO.

And here’s Heather Mac Donald in the WSJ on the apparently nationwide pattern, as well as a video interview with her.