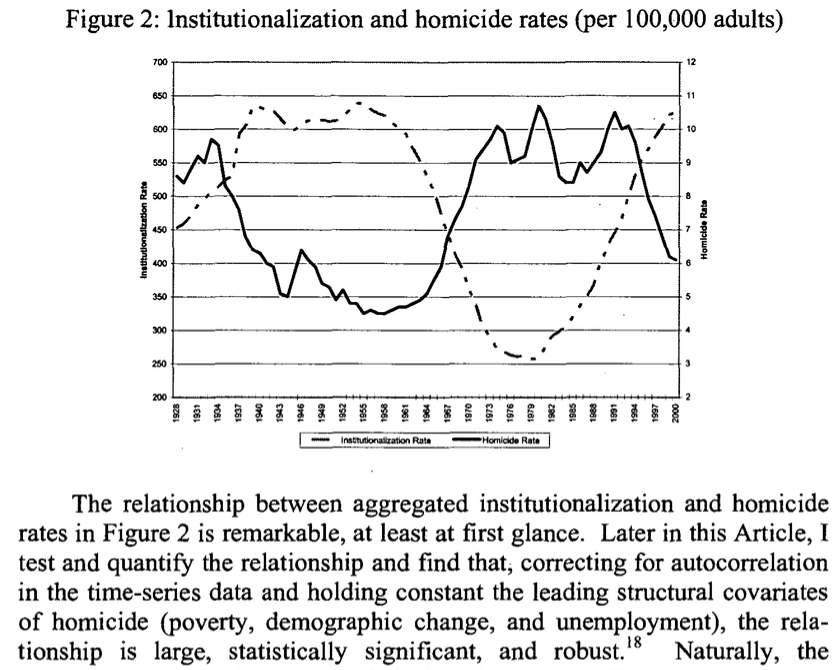 Most news media coverage you read about how we must End Mass Incarceration Now starts with the factoid that crime is down since 1990, since it would be bad for The Narrative to start with, say, the old America of the JFK Administration. The huge LBJ Administration growth in crime that began during the peak of the Warren Court and the Great Society is, apparently, lost in the mists of time.

After all, who has ever heard of an obscure era known as The Sixties? Legend has it that there was once a rare group known as the Baby Boomers who were said to occasionally speak of The Sixties, but they apparently left no records behind.

But the graph above shows liberal policies of cutting imprisonment rates and shutting down mental asylums appears to have led to the big ugly X in the middle of the graph as the institutionalization rate fell and the homicide rate soared in the second half of the 1960s.

From the Texas Law Review:

From the Asylum to the Prison: Rethinking the Incarceration Revolution

… When the data on mental hospitalization rates are combined with the data on imprisonment rates for the period 1928 through 2000, the incarceration revolution of the late twentieth century barely reaches the level of aggregated institutionalization that the United States experienced at mid-century. The highest rate of aggregated institutionalization during the entire period occurred in 1955 when almost 640 persons per 100,000 adults over age 15 were institutionalized in asylums, mental hospitals,and state and federal prisons.

Equally surprising, the trend for aggregated institutionalization reflects a mirror image of the national homicide rate during the period 1928 through 2000. Using a Prais-Winsten regression model that corrects for autocorrelation in time-series data, and holding constant three leading structural covariates of homicide, this Article finds a large, statistically significant, and robust relationship between aggregated institutionalization and homicide rates.

Thanks to Jim Trussels for calling my attention to this graph.