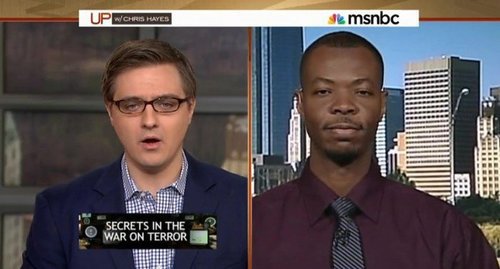 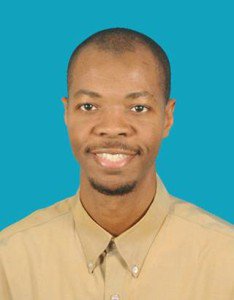 There's a story about Saadiq Long, an American citizen who was on the No-Fly list, and couldn't get back to the US to see his mother because he wasn't allowed to board a plane to America. Turns out he really is pretty dangerous: MSNBC's 'No-Fly List Is Islamophobia' Poster Boy Arrested in Turkey as Part of ISIS Cell, By Patrick Poole, PJMedia,  November 24, 2015.

The point I want to make is that Long isn't a Muslim immigrant terrorist, but a native-born American black terrorist, radicalized by Islam. Stories below describe him, during his "poster boy" period, as a "McAlester native" and "McAlester  [Oklahoma] High School" graduate.

A man, who just two years ago was the poster boy for the far-Left media's attacks against the U.S. government's no-fly list for "unfairly" targeting Muslims, finds himself and several family members sitting in a Turkish prison — arrested earlier this month near the Turkey-Syria border as members of an ISIS cell.

It's a long way from 2013 when Saadiq Long's cause was being championed by MSNBC's Chris Hayes, Glenn Greenwald, and Mother Jones, and was being represented by the Council on American-Islamic Relations (CAIR) terror front.

His story got considerable media attention when his CAIR media representatives here pushed the story that Long wanted to return to his native Oklahoma from his current home in Qatar to visit his ailing mother but couldn't because he was on the TSA's no-fly list. They said his case represented institutional "Islamophobia."

After much yammering by CAIR and the media, Long was allowed to fly to the US to see his mother, but the FBI kept an eye on him.

Once home, however, he was still subject to FBI surveillance according to claims he made during a press conference with his CAIR handlers.

After an incident with local police and the FBI, Long was apparently placed back on the no-fly list, preventing his return to Qatar.

The incident involved him hiding in the back seat of his car in a failed attempt to avoid FBI surveillance.

Long said he wanted break from the constant FBI surveillance. He and his sister, Ava Anderson, decided to head to Oklahoma City on Nov. 23. Long said he got in the back seat of his sister’s vehicle and kept his head down in hopes that the FBI would not follow them and he could have a break from their constant “stalking.”

The FBI caught on to the "hiding in the back seat" thing and considered it suspicious, so he were stopped by Oklahoma police at gunpoint and placed back on the no-fly list, which meant that Long had to go by bus to Mexico to get a flight to Qatar.[Oklahoma native returns to Middle East, By Carla Hinton, NewsOK.com, March 9, 2013]

And apparently, he was a suspect, and acting suspicious because he was a terrorist:

Eventually, Long boarded a bus to Mexico and got on a flight there to return home to Qatar.

U.S. and Turkish officials confirmed Long's arrest to PJ Media, saying that he was arrested along with eight others operating along the Turkish-Syrian border. So far, no U.S. media outlet has reported on his arrest.

I have emailed Long's CAIR handler, Adam Soltani, asking for comment. An email to his attorney Gadeir Abbas was returned as undeliverable.

Good catch, FBI!. And CAIR will no doubt apologize for all its complaining. A search of Google News for news of Long finds no mainstream attention to his arrest in Turkey, but does find this, from NewsOK's website: CAIR officials: Man sentenced to life without air travel, by Gadeir Abbas and Adam Soltani, February 13, 2013.

However, once again the point is that this guy is not an Arab terrorist, but native-born black Muslim terrorist, that the FBI was right to be suspicious of.