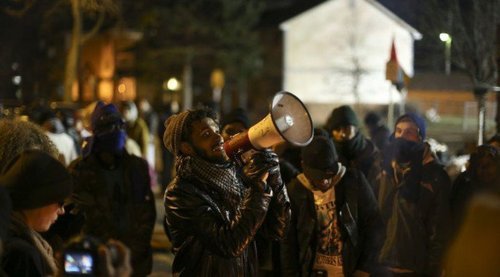 Here's a story linked on Drudge:

Five protesters were shot late Monday night near the Black Lives Matter encampment at the Fourth Precinct police station in north Minneapolis, according to police.

Wait, they have an encampment? Is that legal? Never mind, the police won't do anything.

Those who were shot sustained non-life-threatening injuries, said police spokesman John Elder in a statement.

Miski Noor, a media contact for Black Lives Matter, said “a group of white supremacists showed up at the protest, as they have done most nights.”

One of the three counterdemonstrators wore a mask, said Dana Jaehnert, who had been at the protest site since early evening.

I see at least two masked Black Lives Matter demonstrators in the photo above. I assume they're wearing masks because it's chilly.

When about a dozen protesters attempted to herd the group away from the area, Noor said, they “opened fire on about six protesters,” hitting five of them. Jaehnert said she heard four gunshots.

The shootings occurred at 10:45 p.m. on Morgan Avenue N. about a block north of the precinct station.

Sorry, there were three counter-protesters, exercising their First Amendment rights, and a dozen of the Black Lives Matter "encampment" troops tried to "herd" them away? And this was from an "encampment" on public property? Here's the encampment, which has been set up in the middle of the street in front of a police station. The attackers fled. No arrests had been made by midnight Monday. Police said via their Twitter feed that they are searching for three white male suspects.

A person at the scene said one of the victims had been shot in the stomach, and was undergoing surgery overnight at HCMC.

Jie Wronski-Riley said angry protesters moved the men away from the encampment at the police station.

How were they doing this "moving"? They presumably don't have police dogs and fire hoses, but they outnumbered the white protesters by at least four to one, not counting the rest of the black mob, which apparently numbered in hundreds.

Wronski-Riley heard what sounded like firecrackers and thought, “surely they’re not shooting human beings.”Two young black men on either side of him were hit, one in the back and leg, the other in the arm.

At least two of the three men who had been taunting protesters were firing guns, said Wronski-Riley, who described the incident as “really chaotic, really fast.”

“I am obviously appalled that white supremacists would open fire on nonviolent, peaceful protesters,” said Nekima Levy-Pounds, president of the Minneapolis chapter of the NAACP, who returned to the site after the shootings.

Well, so would I be. However, there were three of them being attacked physically—according to the admission of BLM types—by at least a dozen blacks. That's not nonviolent.

The protesters, angry over the fatal police shooting of 24-year-old Jamar Clark on Nov. 15, have maintained a presence outside the police station ever since.

“Thank you to the community for the incredible support you have shown for our family in this difficult time. We appreciate Black Lives Matter for holding it down and keeping the protests peaceful. But in light of tonight’s shootings, the family feels out of imminent concern for the safety of the occupiers, we must get the occupation of the 4th precinct ended and onto the next step.”

Yes, that would be a good idea. Apparently, they're not going for it.

Here's the case they're protesting against—Jamar Clark, a violent felon, had broken a domestic abuse victim's ankle, and when paramedics were called to said victim, he fought police, trying to take one officer's gun.

Rather than start with the events of that night — which the letter called "tragic" — Bruno began by running down Clark's criminal record. In 2010, Clark was convicted of a first degree aggravated robbery for which he spent 41 months in prison, and in April he got a second felony for "terroristic threats." After that, he was ordered to stay away from a domestic abuse victim until 2020.

Bruno said Clark resisted, fought officers, and took an officer’s gun. In the moment he was shot, Bruno said, Clark was in fact armed with that gun.

“Mr. Clark was given multiple opportunities to desist. Instead, he chose to engage officers in a life-or-death struggle for an officer’s weapon,” Bruno said. “This event should have been a peaceful encounter. It was the actions and choices of Mr. Clark alone which determined his outcome.”

Bruno also revealed that paramedics were called in the first place to treat Clark’s alleged victim of a broken ankle. Clark was not handcuffed at any point, the lawyer insists.

The story clearly contradicts what initial witnesses claimed to have seen.

[Cop’s lawyer says Jamar Clark was holding a gun when he was killed, by Susan Du, November 20, 2015]

Of course it contradicts what "initial witnesses claimed to have seen"—remember Ferguson and "Hands Up Don't Shoot."