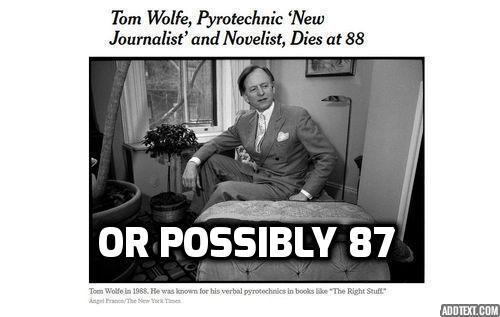 It’s reasonable to say that Tom Wolfe succeeded in cutting a figure in American life comparable to another white-suited, big-spending writer, Mark Twain.

Indeed, I’d argue that Wolfe was near his peak for longer than Twain and on a wider variety of subjects (Twain was the master of writing about being a youth on the Mississippi—a great topic and one he made central to America’s self-image of itself — while Wolfe wrote about an extraordinary range of topics.

For example, in the 1960s Wolfe was a master satirist of upscale New York society (e.g., Radical Chic) and was quite good at writing about young society women. But then he went off to cover fighter-bomber pilots on an aircraft carrier off North Vietnam and detoured in a long obsession with masculine physical courage, culminating in 1979 with The Right Stuff. Then he reversed field back to elite society again, as in Bonfire of the Vanities. But the biggest flaw in Bonfire was that, during his 1970s sojourns among brave men, he’d lost his knack for writing about women. Eventually, however, he slowly worked his way back and by I Am Charlotte Simmons, as a 70s-something man he could now write a large, painfully insightful novel about what it’s like being a young woman.

Wolfe also, famously, switched from journalism to novel-writing. Wolfe hadn’t exactly invented The New Journalism of the 1960s, in which reporters like Wolfe and Hunter S. Thompson incorporated novelistic methods while fiction writers like Truman Capote and Norman Mailer did more reporting than was the norm. But he was present at the creation.

Wolfe didn’t get around to writing a novel until after he’d done a lot of chest thumping in public about how a reporter could write a better novel than the usual professors of creative writing who write most of our literary novels. Jann Wenner paid Wolfe to serialize in Rolling Stone the first draft of Bonfire of the Vanities about a Manhattan writer (modeled on Gay Talese?)

But, it turned out writing a great novel is, to Wolfe’s surprise, harder than he’d guessed. To his credit, he buckled down, switched the main character from the easy one of a writer to the hard one of a bond trader, did the reporting to learn about this important but obscure specialty, and when he finally released Bonfire 30 years ago at age 57 or so, he’d done it. If not the Great American Novel, Bonfire was the Great New York Novel.

Wolfe still had three weaknesses as a novelist. The first was that in his pursuit of machismo he’d lost the ability to write interesting female characters.

The second flaw was that his famously flashy prose style wasn’t as sentence for sentence well-crafted as that of his rival’s like Updike. Wolfe came up with brilliant phrases, some of which have entered the language, but he embedded them in fairly functional prose hepped up with Zap! Pow! typography. For his second novel, A Man in Full, he cranked up his prose style to impressive levels. But with about 100 pages left in the book, you can suddenly see where he suffered major open-heart surgery and the subsequent manic-depressive mood swings that are a common side effect.

The third was one he never overcame: although Wolfe picked fights with high brow prestige novelists like John Updike, his biggest weakness was at the lower brow blocking and tackling basic of coming up with an ending for his plots.

By the way, anybody know the story about why there is much disagreement this week on whether Wolfe was 87 or 88 at his death? Did he knock a year off his age when he tried out for a big league baseball team? Did he add a year to get around the draft? I’d known for a decade or so that there was some uncertainty over whether he was born in 1930 or 1931.

An iSteve bibliography on Tom Wolfe:

Michael Lewis on Tom Wolfe as a Southern Conservative

My review of Wolfe’s “I Am Charlotte Simmons”

My Review of Wolfe’s “Back to Blood”

20th Anniversary of Tom Wolfe’s “Bonfire of the Vanities”

I Hereby Forgive the CIA for Abstract Expressionism

The Hunt for the Great White Defendant: a Reading List

The Ferguson Pogrom and Radical Chic

How Many Media Manias Over White Racism Have Turned Out to be Fiascos?