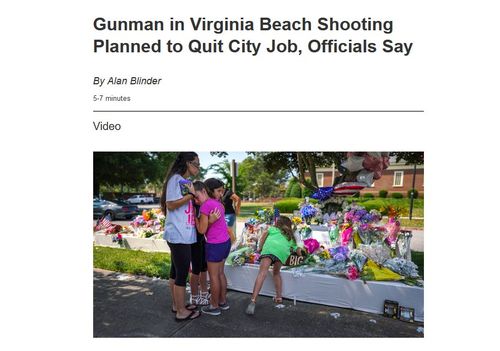 Although the police said that investigators were still examining possible motives for the mass shooting, David L. Hansen, the city manager, said that the suspect, DeWayne Craddock, had sent an email on Friday that declared his intention to quit.

"He notified his chain of command that morning," Mr. Hansen said at a news conference, adding that Mr. Craddock's resignation had not been forced and that investigators were still trying to recover a copy of the email.

Mr. Hansen said at the news conference on Sunday that Mr. Craddock's job performance in his city job had been "satisfactory, and he was in good standing in his department." Asked whether co-workers had raised concerns about Mr. Craddock, Mr. Hansen replied, "We continue to look at that," but added that he was "not sensing that."

Responding to questions a few minutes later, Mr. Hansen acknowledged that Mr. Craddock had notified the city of his intention to resign. Asked whether Mr. Craddock's resignation message had given any reasons for his quitting, Mr. Hansen said, "We are determining where that letter is." But he said he did not believe the resignation was connected with any decision about Mr. Craddock's future position in the government.

Throughout the news conference on Sunday, city officials referred to Mr. Craddock as "the perpetrator" or "the suspect." They did not speak his name.[More]

As I say, there's no picture in the NYT, or any reference to Craddock's race or the race of his victims.