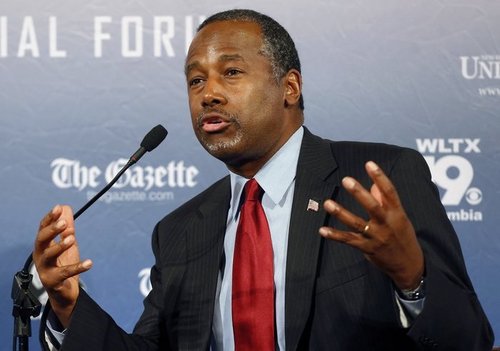 Ben Carson In The Mainstream: A Rasmussen Poll Found Only 28 Percent of Voters Would Consider Supporting a Muslim Candidate for President

Apparently American voters are suspicious of Muslims and their intentions toward free people. How could that be?

Perhaps it’s all the beheadings and other Islamic violence in the news for years. They do make a bad impression on American voters.

Neck slicing does appear to be a Muslim preference for violence. When Pakistani immigrant Muzzammil Hassan honor killed his wife in Buffalo for disobeying him, he committed the murder by beheading her.

The 9/11 jihad attacks were only the beginning of assaults by Muslims against this Americans. In recent years there has been a string of attacks, including the Boston Marathon bombing, the Chattanooga murders of several military service members, the attack by two jihadists on a Garland Texas free speech event, the Fort Hood attack that killed 13 military people, the plot of a Somali teen to blow up a Portland Christmas celebration, a Muslim convert beheading of a co-worker in Oklahoma, among others.

In addition, more than 60 jihad attacks have been thwarted by law enforcement since 9/11. And there is less freedom all over, from oppressive airline travel to security-strangled sports events. 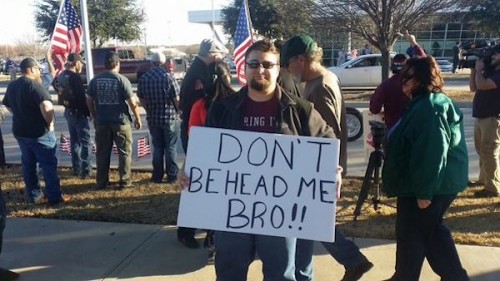 Interestingly, other polls show a growing distrust of Muslims residing in America: for example, a Zogby poll last year found only 27 percent of Americans had a favorable opinion of Muslims.

Muslims should be distrusted: a June poll found a majority believed that they could choose to be ruled by sharia law, rather than the Constitution. Why do they want to live here rather than in some more agreeable Shariastan? A 2011 Gallup poll found substantially fewer Muslims identified as Americans compared with other religious groups.

Muslims immigration has been the worst public policy ever. But liberals think we Americans should ignore the facts and vote for some idealized imaginary Allah worshipper for President, as shown by the recent bashing of candidate Ben Carson.

Finally, would the pro-diversity 28 percent still consider a Muslim candidate if they knew Islam permits lying to infidels (taqiyya) if it will further Islamic conquest?

Few Would Vote for a Muslim President, Rasmussen Reports, September 24, 2015

Republican presidential hopeful Ben Carson has been criticized by other candidates and the media for saying he could not support a Muslim for president of the United States. But guess what? Over half of U.S. voters agree.

Fifty-one percent (51%) of Likely U.S. Voters say they would not personally be willing to vote for a Muslim president. The latest Rasmussen Reports national telephone survey finds that just 28% say they would be willing to support a Muslim in the White House. A sizable 20% are undecided. (To see survey question wording, click here.)

Fifty-two percent (52%) say most of their family, friends and co-workers also would not be willing to vote for a Muslim president. Only 15% say they would. Thirty-two percent (32%) are not sure.

By comparison, 78% said they could vote for a black president after Barack Obama clinched enough delegates to be the Democratic presidential nominee in 2008.

Republicans are more than twice as likely as Democrats – 73% to 35% to say they would not personally vote for a Muslim to be U.S. president. A plurality (48%) of voters not affiliated with either major party agrees.

The large number of undecideds suggests that many voters are unwilling to reveal their opinion on what is seen as a controversial topic.

Seventy-one percent (71%) of Americans think political correctness is a problem in America today. Seventy-three percent (73%) think Americans have to be careful not to say something politically incorrect to avoid getting in trouble.

The survey of 1,000 Likely Voters was conducted on September 22-23, 2015 by Rasmussen Reports. The margin of sampling error is +/- 3 percentage points with a 95% level of confidence. Field work for all Rasmussen Reports surveys is conducted by Pulse Opinion Research, LLC. See methodology.

Seventy-five percent (75%) of voters believe that when it comes to covering prospective presidential candidates, the media is more interested in creating controversies about them than it is in reporting where they stand on the issues.

Seventy-six percent (76%) of Republicans – and 71% of all voters – think most reporters, when covering a political campaign, try to help the candidate they want to win.

Those under 40 are more supportive of a Muslim president than their elders are, but even younger voters don’t have much confidence in their family, friends and relatives to agree.

Just 10% of GOP voters and 14% of unaffiliateds say their family, friends and relations would vote for a Muslim chief executive. That compares to 21% of Democrats, but a plurality (44%) of voters in President Obama’s party are not sure.

Liberals are far more likely than conservatives and moderates to say they personally would vote for a Muslim president but are much less sure of their family, friends and relatives.

Fifty-two percent (52%) believe Islam as practiced today encourages violence more than most other religions.
Seventy-five percent (75%) think Islamic religious leaders need to do more to emphasize the peaceful beliefs of their faith.

Just prior to his comments about a Muslim president, 59% of Likely Republican Voters said Carson, a retired neurosurgeon, is likely to win the Republican nomination, but only 16% felt it is Very Likely.