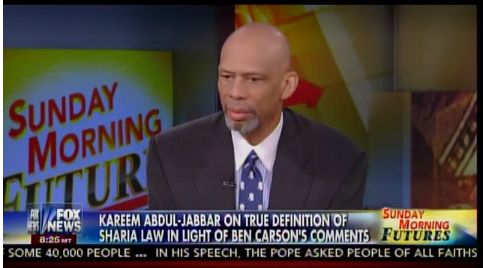 The retired basketball star Kareem Abdul Jabbar appeared with Maria Bartiromo on Sunday to flack his new book and also to deny the obvious truth that Islam is a religion of conquest that tortures and kills anyone who resists its rule.

Out in the real world, Christians in the Middle East are being mass murdered and driven out by ISIS, an Islamic jihad group, one of many around the world. The 60,000 Christians of Mosul have fled the city, where their community has lived for nearly two millennia. The process of Islam conquering by the sword has been going on for 1400 years and is the reason why North Africa and the Middle East are no longer Christian.

Here’s a clip of Kareem spinning his taqiyya, rather clumsily I thought.

BARTIROMO: Electing a new President of the United States — attack ads and messages isolating certain races and cultures are often overtaking talk about policies to move the country forward. My next guest says it is getting in the way of getting the real messages out there. Kareem abdul-Jabbar is with us today, the Basketball Hall of Famer, author of the new book Mycroft Holmes, a modern take on Sherlock Holmes, and Kareem, it is wonderful to have you on the show today.

JABBAR: Nice to be here.

BARTIROMO: Thank you so much for joining us. I’m going to get to the book in a moment because I am know you are a prolific writer. We’ve talked years ago about your children’s books; we’ll get to that in a moment, but first I want to talk about what’s going on in this election cycle and that is the most recent comments from Dr. Ben Carson. He has backpedaled a bit, basically saying he would accept a Muslim in the White House so long as that person rejected Shariah law. We know that Shariah law means killing homosexuals; women are subservient to men. Tell me about Shariah law. You converted to Islam how many years ago?

JABBAR: In 1967, a long time ago, but Islam does not okay the things that you just mentioned: killing people, rape, all of these things that have been associated now with Shariah law — that’s crazy. None of the people that had that criticism of Shariah law have checked out the law because it’s not even for non-Nuslims. Sharia law is for the ruling of an Islamic state, so Shariah could never apply here in America because America is a very diverse place. So they’ve got it all wrong. They don’t know what the law states actually, and they want to distort it in order to make Muslims the villain and there’s enough real villainy going on without people inventing it.

Actually, Kareem, Muslims have made themselves the villains by their daily jihad attacks and murders against non-Muslims.

And it’s nowhere close to true that sharia is not imposed on non-Muslims. In fact, sharia is a standard guide to behavior modification in areas where jihadists run the streets, from Islamabad to Berlin’s no-go zones. Muslims post their little signs claiming Sharia Zone and then the self-appointed jihad gangs enforce as they wish, like beating up an American student in London for drinking a beer or threatening women and gays to behave as if they were in Shariastan or else.

Lies like Kareem’s are an attempt to quiet fears concerned Americans have about admitting thousands of unvetted Syrian Muslims who are a genuine national security threat. ISIS has openly pledged to infiltrate its jihadist killers into the chaos of today’s illegal alien/refugee tsunami into Europe and beyond.

An interesting side note to Kareem’s conversion to Islam appeared in the autobiography of his girlfriend at the time, Pam Grier. They were talking about getting married, but Grier did not want to walk behind him as an Allah-style wife nor give up her educational plans or career as a movie actress.

It should be remembered that Ben Carson’s remarks against Islam intruding into America are entirely mainstream, as shown by a recent Rasmussen poll where only 28 percent of voters would consider supporting a Muslim for President. The current Islam-friendly President is bad enough.

Finally, don’t forget to phone your Congress human to express your objection to the Muslim refugee tsunami that diversity crazies would like. Plus NumbersUSA has some polite faxes that can be easily sent.