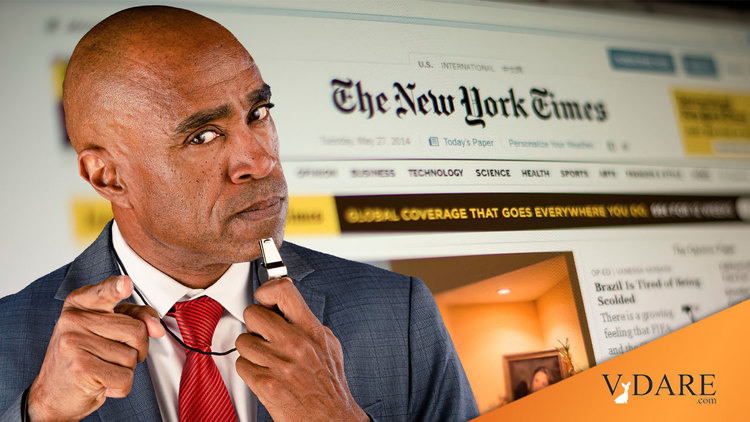 NEW YORK TIMES Accused Of Racism By Its Own Staffers The journalists’ union at the New York Times, The News Guild of New York, has issued a report showing that black and Hispanic employees of the NYT do lousier work on average than Asians, who lag behind whites.

The New York Times’s performance review system has for years given significantly lower ratings to employees of color, an analysis by Times journalists in the NewsGuild shows.

The analysis, which relied on data provided by the company on performance ratings for all Guild-represented employees, found that in 2021, being Hispanic reduced the odds of receiving a high score by about 60 percent, and being Black cut the chances of high scores by nearly 50 percent. Asians were also less likely than white employees to get high scores.

In 2020, zero Black employees received the highest rating, while white employees accounted for more than 90 percent of the roughly 50 people who received the top score.

The disparities have been statistically significant in every year for which the company provided data, according to the journalists’ study, which was reviewed by several leading academic economists and statisticians, as well as performance evaluation experts.

Performance ratings have a direct impact on employees’ paychecks and career opportunities. In 2021, the company used the scores in determining the size of Guild members’ bonuses. Guild members who believed their contributions weren’t fairly rated in the review process have said they feel demoralized and alienated — a pernicious outcome as The Times attempts to recruit and retain a diverse workforce. Management has denied the discrepancies in the performance ratings for nearly two years, time it could have instead spent trying to make the system better for everyone.

The performance rating system has changed over time, and the precise nature of the racial disparities has varied somewhat from year to year. But what has remained consistent is that white Guild members, on average, receive higher ratings than their colleagues of color. These findings showed up under a variety of different methodological approaches, including those suggested by the company itself.

The Occam’s Razor explanation is that that’s what you get with different distributions, especially when you do affirmative action hiring. It’s the Sisyphean nature of diversity programs: you congratulate yourself for hiring more blacks by scraping the bottom of the black barrel harder, but then it turns out that your black hires perform worse on the job on average, so you get accused of racism all over again. Rinse and repeat at ever higher levels.

But, of course, the New York Times wouldn’t allow itself to point out that obvious logic.