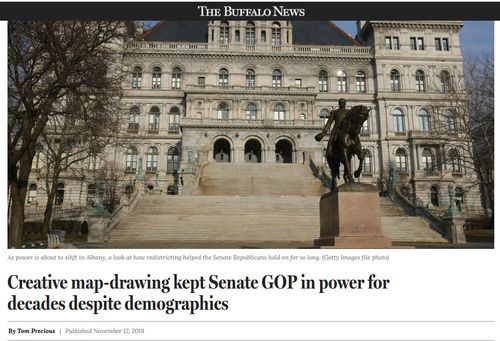 I previously wrote about how the New York Republican Party (NYGOP) lost complete control over the entire state due to "changing demographics" but the Buffalo News reported that the loss was inevitable and the NYGOP only retained power for as long as it did in the state Senate due to "gerrymandered" districts (a slang term for favorably re-districting an area).

As Republicans fretted last week over the string of Election Day losses that flipped the state Senate to Democratic Party control, they might seek solace in a not-so-small dose of reality. The Republicans should have lost the Senate at least 10 years ago and, in fact, probably a lot longer ago than that were it not for the state's arcane way of determining how legislative seats are drawn. [Creative map-drawing kept Senate GOP in power for decades despite demographics, By Tom Precious, The Buffalo News, November 12, 201]

This article is striking for many reasons, one of which is that the title actually mentions "demographics" being the main factor responsible for the NYGOP's loss. It's long been an accepted practice in politics to create awkwardly shaped election districts to make them more favorable for one of the two major political parties but what's rarely spoken about is that this redistricting is almost entirely done based on the race of the voters. It's comical to see Republicans who pay lip service to "diversity" and "colorblind conservatism" blatantly realign the election map to reduce the influence of minority majority areas. This shows that they know VDARE.com is right but they're too scared to ever publicly admit it and as elections are becoming even more obvious racial headcounts, the Buffalo News apparently decided to just plainly state the truth.

In the Senate, Republicans turned to the process in a desperate attempt to try to hang on in the face of rising numbers of registered Democratic voters and declining numbers of GOP voters. So every 10 years, over the howls of government watchdog groups, Senate Republicans and their map-making experts zigged and zagged their way through New York State to devise some of the most puzzling looking districts that stretched the constitution's notions of "compact" and "contiguous" districts... A GOP district that included Buffalo was connected to Republican-favoring suburbs via a spit of land along Lake Erie so narrow you could throw a baseball across it... A district just east of Buffalo was re-drawn to pump more GOP voters into a nearby district held by a Republican. The new district was stretched so far east that it ended up in neighborhoods in south Rochester.

The Republicans basically tried the best they could to delay the inevitable as the demographic transformation of their state continued unabated.

Their task in places such as Nassau County became to slice and dice some Democratic neighborhoods, mostly racial minority ones, and spread them around more than one GOP Senate district as a way of blunting the concentration of Democratic voting power. It worked well over the decades. But it ended Tuesday, when even gerrymandered lines could no longer protect Republicans from losing enough seats that Democrats will have a large majority to take over the Senate.

But, and this might be the most frustrating aspect of the story, the Senate Republicans just ran out the clock on their time in power by wasting their efforts on laughably unimportant issues instead of doing anything to halt the complete Democratic takeover of the state.

The article even talked about how some Republican politicians switched party registration to run as Democrats when it became impossible for them to get elected in Democrat majority districts. So much for "conservative principles" I guess. Here Nick Spano, a former Senate Republican and current lobbyist, explains that today's Republicans might be tomorrow's Democrats.

“The demographic changes you saw, particularly in the suburbs, were so profound that it was impossible for someone like me, a moderate Republican, to win an election in a district that became overwhelmingly Democratic in registration. It’s no secret why my brother is a Democrat as the mayor of Yonkers," Spano said of Mayor Mike Spano, a former Republican who became a Democrat.

This may work for opportunistic former Republicans for the time being but as the Democratic Party continues to become a party of non-whites that caters to the far left, you can bet they'll not be interested in a white man with "moderate Republican" views for much longer.

The article also explains that racial minorities have complained that such redistricting tactics were racist for years.

Governors complain about redistricting, but seldom do much about it. In 1992, Gov. Mario Cuomo approved Senate lines that minorities described as racist in some areas.

The people who complained that redistricting was racist when it was done to split the vote of minority majority areas will most likely cheer as districts are redrawn to allow minority voters to dominate elections as the article explains the Democrats want to redistrict again resulting in the NYGOP losing even more electoral ground than they already have.

But now there's another problem looming for the GOP: 2022. That's when Democrats, given their new strong majority and demographics in their favor, are likely to be in charge of the next redistricting round. Already, Democrats are privately telling Republicans they expect to draw at least 40 “safe” Democratic seats – keeping the party in control for decades to come.

The NYGOP seems to be on the verge of political extinction in the state with no good options to climb back from the abyss. There is some irony in the home state of President Trump serving as a dire warning to all of us about the impending electoral disaster if the Republicans are not successful in fighting back. You can expect a similar outcome in other states if the Democrat's demographic replacement continues unabated. Densely populated urban areas and their immediately surrounding suburbs will become Democratic strongholds which will make it impossible for Republicans to win statewide elections and eventually Democrats will gain complete control of the state legislature. Once that happens, Democrats will redistrict the state to build on their gains and further cement One Party Rule.