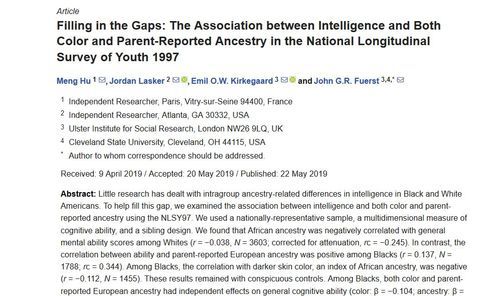 New Paper On The Association Between Color and IQ

Filling in the Gaps: The Association between Intelligence and Both Color and Parent-Reported Ancestry in the National Longitudinal Survey of Youth 1997

Abstract: Little research has dealt with intragroup ancestry-related differences in intelligence in Black and White Americans. To help fill this gap, we examined the association between intelligence and both color and parent-reported ancestry using the NLSY97.

The Bureau of Labor Statistics’ National Longitudinal Survey of Youth 1997 is similar to the famous NLSY79 featured in The Bell Curve. “The NLSY97 consists of a nationally representative sample of approximately 9,000 youths who were 12 to 16 years old as of December 31, 1996.” They were given the military’s AFQT/ASVAB entrance exam and used to renorm it.

We used a nationally-representative sample, a multidimensional measure of cognitive ability, and a sibling design. We found that African ancestry was negatively correlated with general mental ability scores among Whites (r = −0.038, N = 3603; corrected for attenuation, rc = −0.245). In contrast, the correlation between ability and parent-reported European ancestry was positive among Blacks (r = 0.137, N = 1788; rc = 0.344). Among Blacks, the correlation with darker skin color, an index of African ancestry, was negative (r = −0.112, N = 1455). These results remained with conspicuous controls. Among Blacks, both color and parent-reported European ancestry had independent effects on general cognitive ability (color: β = −0.104; ancestry: β = 0.118; N = 1445). These associations were more pronounced on g-loaded subtests, indicating a Jensen Effect for both color and ancestry (rs = 0.679 to 0.850). When we decomposed the color results for the African ancestry sample between and within families, we found an association between families, between singletons (β = −0.153; N = 814), and between full sibling pairs (β = −0.176; N = 225). However, we found no association between full siblings (β = 0.027; N = 225).

So the idea here, if I understand this correctly, is to test the theory that colorism (racial discrimination against darker skinned African-Americans) is the reason that whiter-looking blacks have slightly higher IQs.

But among 225 full sibling pairs, the difference is negligible.

My guess is that blacks tend to discriminate against other blacks in favor of lighter skin, but whites don’t, because the One Drop Rule means that whites classify people as Black or Not Black and generally group them together conceptually.

It would be interesting to reproduce this analysis in Brazil, where there appears to have traditionally been a lot of society-wide discrimination in favor of the fairer sibling, especially the fairer sister in the marriage market.

Differential regression to the mean results indicated that the factors causing the mean group difference acted across the cognitive spectrum, with high-scoring African Americans no less affected than low-scoring ones. We tested for measurement invariance and found that strict factorial invariance was tenable. We then found that the weak version of Spearman’s hypothesis was tenable while the strong and contra versions were not. The results imply that the observed cognitive differences are primarily due to differences in g and that the Black-White mean difference is attributable to the same factors that cause differences within both groups. Further examination revealed comparable intraclass correlations and absolute differences for Black and White full siblings. This implied that the non-shared environmental variance components were similar in magnitude for both Blacks and Whites.

Perhaps, though, in the future U.S., blacker blacks might have higher IQs due to legal immigration of African elites?