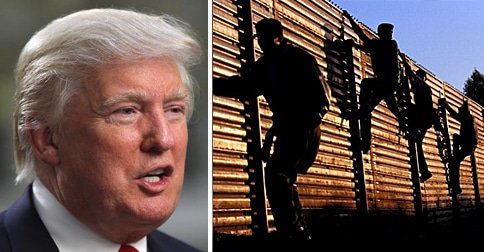 NBC Solicits Lies About The Donald's Fence Proposal From "Experts"

Now that Donald Trump has brought back the idea of building a fence, the left is again attacking the utility of a border fence. We know that fences work: just look at how well the fences worked in securing Israel from Palestinian terrorists and illegal aliens from Africa.

Constructing an impassable wall along the U.S.-Mexico border would be a tall order — even for master real estate developer and 2016 GOP presidential candidate Donald Trump.

"From a security standpoint, it really is not an intelligent solution," said Eric Olson, associate director of the Latin American program at the non-partisan Wilson Center. In fact, "it's ludicrous," Olson said of the idea, which has become a hallmark of Trump's campaign.

Experts estimate that building and maintaining such a wall on the 1,954-mile border, which snakes along four huge states, would cost tens of billions of dollars. And the 21,000 border patrol agents currently on duty would be "nowhere near sufficient" to keep close surveillance on all of it, said Wayne Cornelius, director of University of California San Diego's Mexican migration field research program.

"Any kind of border barrier can be climbed over, and to prevent that type of activity, we would have to have not just drones in the sky, but a lot of boots on the ground," he said.

Now, are these two "experts" engineers, law enforcement experts, or men with extensive military experience? No, Eric Olson [Email him] is a foreign affairs specialist with a Master's Degree in International Affairs and a Bachelor's Degree in History. Hardly the training for building anything, much less a fence like those the Israelis have successfully and apparently cheaply built.

Worse yet, Wayne Cornelius [Email him] is an immigration activist and tenured radical with a background in Political Science and Latin American Studies. No engineering, military, or law enforcement training, experience, or study.

The extent of their argument is the 12' fence is overcome by 13' ladder.

However, when a modern fence is built, it works:

NOGALES, Sonora — The 31-year-old Oaxaca native was dangling by one arm, a drop of more than two stories below her.

Slowly, her hand slipped and her legs slammed the desert floor with a bone-rattling thud. She couldn’t move. All she could think about was the 14-year-old daughter she had left behind — whom she might never see again.

Reports of migrants getting hurt when trying to jump the fence or trekking through the treacherous desert are not new, but immigrant shelters and Mexican officials are seeing a spike of migrants — especially women — getting hurt trying to jump the border fence. They think, incorrectly, that the jump will be easier than making the treacherous trek through the 100-degree desert.

“It’s the same crossing through the wall or through the desert,” said Gilda Felix, director of the Juan Bosco immigrant shelter in Nogales, where many of the injured are brought before going home. “Both are difficult and dangerous.”

This year the Mexican Consulate in Tucson has seen more people needing medical attention after falling from the border fence than from crossing the desert, said Ricardo Pineda, the consul general. So far this year, there have been 37 cases of injured Mexican migrants. In all of 2014 Pineda’s office reported 56 cases. That includes all injuries, not just falling from the fence.

Furthermore (the lies from the left never end) they also think it can't be built:

Many parts of the border are dotted with rugged terrains and streams, which would be nearly impossible to build on. In other areas, there are protected wildlife refuges and Indian territory. And elsewhere, ranchers would have to agree to sell their land to the federal government — which is unlikely to happen, even as disgruntled as they may be that migrants are using their property as a border crossing area.

First, most of the Mexican border is flat and featureless, perfect ground for building a fence. There are only a few areas of California that are mountainous. Arizona and New Mexico have even fewer mountainous areas, and Texas only a few hills on the border. In any event, fences would channel the flow of illegal immigration to those more difficult areas, discouraging illegal immigration and making enforcement easier. It would not be long before illegal aliens would get discouraged.

So, given the war on The Donald,  there is no doubt a nerve has been struck, and the Cultural Marxists see the danger a fence is to their plan for electing a new people.