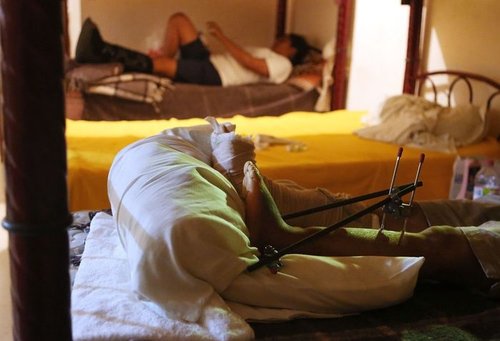 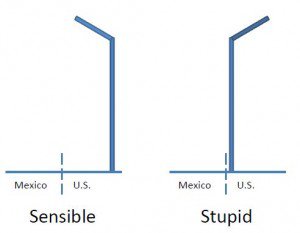 A story reported by Perla Trevizo in the (Tucson) Arizona Daily Star on July 4, Border Fence Jumpers Breaking Bones, has many points of note.

For one, the injuries from bad encounters with the fence — this one between Nogales, Sonora, Mexico and Nogales, Arizona — can be quite severe.  For example, after falling from the heights, a 31-year-old woman from Oaxaca "lay on the ground for two hours until a Border Patrol agent spotted her. She had broken both legs and her spine."

It's not clear from the article — reported from Nogales, Sonora — on which side of the border this woman landed, but she was interviewed in an "immigrant shelter" in Nogales, Sonora.

Nor are illuminating details of her fall provided.  But years ago (circumstances forgotten) I heard that, in some places, the federally-constructed border fence is installed backwards (see the "Stupid" configuration in the accompanying diagram).  Instead of the overhanging portion arranged (see the "Sensible" configuration) so as to make getting over the fence more difficult from the Mexican side, it's no impediment at all.  Then when people "summit," it would be hard to climb down on the U.S. side, whereas long drops from the edge of the overhang would be natural, yielding broken bones among those who get across.  (Again, I'm just speculating that such applied federal stupidity is in play here.)

Another notable feature of the article is the cost to nearby U.S. hospitals of this border-fence jumping:

Area hospitals are responsible for much of the cost associated with treating injured border crossers, but most don’t keep track of how many there are or of the cost.

Many of the less seriously injured go to Holy Cross in Nogales. When the injuries involve trauma, patients are taken to Tucson, either to University Medical Center or Tucson Medical Center.

Banner-University Medical Center doesn’t specifically track falls from the border fence, but Border Patrol agents bring in about 50 crossers a year with fall injuries, said Katie Riley, a hospital spokeswoman. They include falls from the wall as well as in the desert. Most are fractures and lacerations.

The charges vary depending on severity of injury, she said. “We bill these patients, but few are able to pay anything, so most of the charges are written off.”

Until several years ago, the federal government reimbursed hospitals for a small fraction of those expenses, but that source of revenue no longer exists.

("Holy Cross" is evidently a reference to Carondelet Holy Cross Hospital in Nogales, Arizona.  Hospitals in Nogales, Sonora apparently cater heavily to bargain-hunting, self-paying customers from the U.S. and leave to their U.S. counterparts the deficits arising from Mexicans' experiences with the border fence.)

It's understandable that hospitals don't track the costs, since it would be another bureaucratic bother and would lack a compensating reward.  But isn't that still penny-wise, pound-foolish, since cumulative outrage over well-documented costs would add to the pressure on our feckless "public servants" to actually do something?

Perhaps the most striking feature associated with Trevizo's article is that, among the 123 online comments that have accumulated up to 9 p.m. Mountain Time on July 8, there isn't a speck of sympathy for those casualties arising from encounters with the fence.

- Too bad they don't land on their heads and break their necks.

- What's next? Feeling sorry for the armed bank robber that got ink in his eyes when the inkpack exploded in his stolen money? LOL

- I think that strategically placed landmines on the Mexican side would go a long way in preventing injuries on the "terrible" fence.

- They'd stop invading US territory if we shot them. Nothing says "go away" like piles of bodies rotting in the sun. But then, Mexico is such a cesspool that its citizens would gladly die to escape it. So now they're turning America into the same cesspool that they fled.

- I think it needs a moat full of alligators so that there's nothing left for us to have to pay medical bills for.

My interpretation: Reaction to this article turns out to be another good example of the fed-up-ness of Americans with the immigration madness that has been ceaselessly forced down our throats.  "If there is hope, it lies in the comment threads."

Another good sign, I think: A goodly fraction of the harsh comments are, apparently, from women.

Finally, quite a few readers were angry enough to take it out on the reporter, having detected editorializing in the writing that I don't think is actually there.  Closing examples:

- The [reporter] is dumber than a bag of hammers. Breaking bones in the commission of an illegal act is swift justice.