NATIONAL REVIEW Says Demographics MAY Be Destiny, As Far As Muslims Are Concerned - But What About Hispanics? 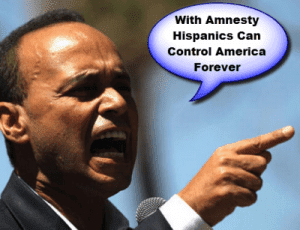 The Charlie Hebdo killings inspired this commentary, in which Tuttle admits that demography has an awful lot to do with destiny, and that the United States had better stop importing Muslims unless it wants what happened in France to happen here. Wait minute. It has!

Demographics may not be the whole of destiny, but they are certainly a good part, and across the Atlantic, the United States seems increasingly to be turning toward Western Europe’s most undesirable demographic trends. ...

In 1992, 41 percent of new permanent residents in the United States — green-card holders — hailed from the Asia-Pacific region, the Middle East and North Africa, or sub-Saharan Africa, according to the Pew Research Center. A decade later, the percentage was 53 percent. Over that same period, predictably, the number of Muslim immigrants coming to the United States annually has doubled, from 50,000 to approximately 100,000 each year. In 1992, only 5 percent of Muslim immigrants came from sub-Saharan Africa; 20 years later, it was 16 percent. Of the 2.75 million Muslims in the United States in 2011, 1.7 million were legal permanent residents. ...

Whatever the exact level, it can hardly be considered surprising that as the Muslim population in the country has expanded, so has the incidence of radicalism.

The Boston Marathon bombers, Tamerlan and Dzhokhar Tsarnaev, born in the Soviet Union and Kyrgyzstan, respectively, came to the United States as refugees in 2002. They were radicalized inside the country, Tamerlan reportedly at the Islamic Society of Boston mosque in Cambridge, Mass. That mosque has reported links to several other convicted, or suspected, terrorists. ...

And one can look elsewhere. In 2003, the “Lackawanna Six,” six naturalized citizens from Yemen, were convicted of providing material support to al-Qaeda. Lackawanna, N.Y., (as well as nearby Buffalo) is home to a large Yemeni population. In May, authorities arrested Mufid Elfgeeh, a Yemeni-born man who was allegedly attempting to recruit for the Islamic State and use revenues from his grocery store to fund the organization. He was living in Rochester, N.Y., just an hour east.

But the potential threats of a permissive immigration policy are multigenerational. France has spent decades ushering in its recent fate.

Consider: Said and Chérif Kouachi — the brothers responsible, along with a third accomplice, for the Charlie Hebdo murders — were native Frenchmen whose parents hailed from Algeria. So was Farid Benyettou, the man who drew Chérif Kouachi to radical Islam. So was Mohammed Merah, who shot seven people dead, including three children at Jewish day school, in Toulouse and Montauban in March 2012.

Radicalism seems to ferment as much, if not more so, among first-generation Westerners as among their immigrant parents. Which means that massive Muslim immigration may have few visible repercussions today — but a great many tomorrow.

That reality is becoming manifest in the United States.

Dearborn, Mich., is home to just under 100,000 people, about 40 percent of whom are Muslim. In 2013, a leaked government document revealed that more people from Dearborn were on the federal terrorist watch list than from any other city except New York. In March 2014, Dearborn resident Mohammed Hassan Hamdan was arrested at the Detroit Metropolitan Airport on his way to join Hezbollah in Syria.

In October of last year, Mohammed Hamzah Khan, of Bolingbrook, Ill., was arrested at Chicago’s O’Hare International Airport on his way to enlist in the Islamic State. He had left his family a three-page letter inviting them to join him.

And there are the dozens of individuals from the Twin Cities’ Somali diaspora, many of whom worshiped at the same mosque, who have tried — successfully and otherwise — to do the same. (For more information on this phenomenon, go here.)

Perhaps the most infamous native-born terrorist: Nidal Malik Hasan, the Fort Hood shooter, whose parents immigrated to the U.S. from the West Bank.

Suggesting a correlation between the number of Muslims in the country and the incidence of radicalism is, of course, considered insensitive, if not downright “Islamophobic.”

But the only point here is a mathematical one: Whatever the percentage of Muslims who support or would ever consider supporting jihadism, the raw number obviously increases along with the total number of Muslims. One percent of 10 million is much larger than 1 percent of 1 million. The questions is, at what point does the radical population achieve a kind of critical mass?

This need not be inevitable. America’s immigration policy can be tailored to address this challenge. Unfortunately, the available measures will be only minimally effective without a significant change of political circumstances.

The Troubling Math of Muslim Migration, January 15, 2015, links in original

Fewer Muslim immigrants would be a good idea, but currently America can expect more problems from barrios than banlieues.