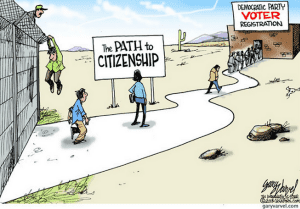 Breitbart reports leaked training documents indicating that the Obama Administration is making it more and more difficult for Border Patrol agents to guard the border.   Shouldn't this be on the front burner on Capitol Hill?  Here's the report:

Leaked internal training documents from U.S. Customs and Border Protection (CBP) reveal Border Patrol agents are now receiving guidelines instructing them that the vast majority of illegal immigrants in the U.S. are off limits to federal agents and are substantially immune to detention and deportation. A trusted federal agent in the CBP provided exclusive copies of the documents to Breitbart Texas and also agreed to an interview on the condition of anonymity.  According to the source, these training documents were required training for U.S. Border Patrol agents and each agent was required to sign their name to confirm receiving the training.

The leaked training documents are careful to note that no part of this training should be construed as discouraging arrests, but the entirety of the training appears to do exactly that. The training materials, when coupled with a November 20, 2014 memo on prosecutorial discretion from Homeland Security Secretary Jeh Johnson, indicate that agents should primarily only arrest someone who they directly see cross the border, if they are a wanted criminal, a convicted felon, have an extensive or a violent criminal history, or otherwise pose a national security or public safety threat.

The majority of other illegal aliens cannot be detained or deported without specific approval from leadership.

The source clarified this and said, “Nothing says don’t arrest, but it clearly says don’t waste your time because the alien will not be put into detention, sent back or deported. There is literally no reason to arrest an illegal alien because they are specifically telling Border Patrol there will be no consequence for the illegal alien. It is a waste of time and resources to arrest someone who is off limits for detainment or deportation and the documents make that fact clear. Border Patrol agents are now being trained to be social workers, not law enforcement.”

The memo from Jeh Johnson mentioned above is titled, “Policies for the Apprehension, Detention and Removal of Undocumented Immigrants” and was released on November 20, 2014. The guidelines became effective on January 5, 2015. The memo (embedded below) asserts:

In the immigration context, prosecutorial discretion should apply not only to the decision to issue, serve, file, or cancel a Notice to Appear, but also to a broad range of other discretionary enforcement decisions, including deciding: whom to stop, question, and arrest; whom to detain or release; whether to settle, dismiss, appeal, or join in a motion on a case; and whether to grant deferred action, parole, or a stay of removal instead of pursuing removal in a case. While DHS may exercise prosecutorial discretion at any stage of an enforcement proceeding, it is generally preferable to exercise such discretion as early in the case or proceeding as possible in order to preserve government resources that would otherwise be expended in pursuing enforcement and removal of higher priority cases. Thus, DHS personnel are expected to exercise discretion and pursue these priorities at all stages of the enforcement process-from the earliest investigative stage to enforcing final orders of removal-subject to their chains of command and to the particular responsibilities and authorities applicable to their specific position.

The Jeh Johnson memo further illuminates the intention behind the leaked training materials and exactly how broad the “not a priority” category is intended to be. Johnson wrote:

As a general rule, DHS detention resources should be used to support the enforcement priorities noted above or for aliens subject to mandatory detention by law. Absent extraordinary circumstances or the requirement of mandatory detention, field office directors should not expend detention resources on aliens who are known to be suffering from serious physical or mental illness, who are disabled, elderly, pregnant, or nursing, who demonstrate that they are primary caretakers of children or an infirm person, or whose detention is otherwise not in the public interest. To detain aliens in those categories who are not subject to mandatory detention, DHS officers or special agents must obtain approval from the ICE Field Office Director.

The source said, “This is not how it was before. Border Patrol used to arrest, process, and turn the illegal alien over to Immigration and Customs Enforcement (ICE) and the courts. Under this new program, the majority of illegal aliens will be released directly from the Border Patrol with no appointments or expectation that they ever have to show up for a hearing.

“Before these changes, all illegal aliens arrested by Border Patrol were required to enter the deportation system where they would be scheduled for a deportation hearing at a future date. Under this new system, the illegal aliens are not even required to show up for a hearing ever. Not only are we releasing these people with no hearings scheduled, no notice to appear, but the DHS [Department of Homeland Security] is forcing Border Patrol to prepare the initial paperwork for the illegal aliens’ work permits.” The source added, “Americans really need to think about the terrorism-related implications of this. Illegal aliens who are suspected of having terrorism ties, but not convicted, could be permitted to stay in the country.”

The training materials present a number of scenarios that federal agents might encounter and the official DHS guidelines for how to deal with such encounters. EXCLUSIVE: CATCH AND RELEASE 2.0 - LEAKS HIGHLIGHT TEARDOWN OF IMMIGRATION ENFORCEMENT, by Brandon Darby, Breitbart, January 11, 2015