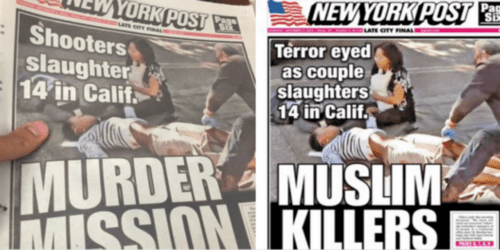 In a VDARE.com blog earlier today, editor James Fulford featured the spectacular front page of today's New York Post—spectacular because emblazoned across an image from yesterday's festivities in San Bernardino, CA are the words "MUSLIM KILLERS."

Thrilled to see the unvarnished, politically-incorrect truth proclaimed so prominently, I phoned the Post to give them my "Attaboys!" for their courage and wound up leaving a brief voice mail to that effect.  But anticipating that those brave editors will be bringing down upon themselves the rage of the American Establishment, I also put it in writing, sending them, under the subject line ... 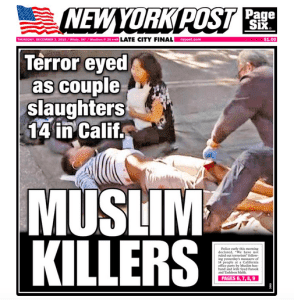 I'll guess that you might be battened down for torrential abuse from leftist ninnies — i.e. most of your professional peers — over your front-page splash "MUSLIM KILLERS," but I hope you'll also be receiving lots of notes (or phone calls) like mine.

As Eric Blair [George Orwell] said, "To see what is in front of one's nose needs a constant struggle."

Thank you for engaging, so successfully (at least this time), in that struggle.

Sure enough, VDARE.com's Brenda Walker subsequently forwarded a page from the "Bare Naked Islam" website, NEW YORK POST gets trashed for changing its headline to the politically incorrect one.  Besides an image showing the Post's headline switch (from "MURDER MISSION" to "MUSLIM KILLERS"), that page gathers about a dozen tweets with the the common theme that the Post's later headline is shameful.

But as is hearteningly typical, the handful of online comments added at the "Bare Naked Islam" page are entirely supportive of the Post.  For example, commenter Thomas Sleeva gets right to the central idea, saying, in part, "So, they’re the first media outlet to call a spade a spade?"

Now it's your turn to buttress these brave editors, VDARE.com readers!  Here's contact information for the New York Post:

Letters to the editor: letters@nypost.com