Mexico used to be a nice country, pleasant and safe to visit. But its new identity as the narco-hub of the Western Hemisphere has turned it into one of the most dangerous places on earth, where cartels engage in street battles over turf in which innocent civilians are killed in the crossfire. Naturally, such chaos has a negative effect on normal activities like commerce and education. People hide in their houses and civil society shrivels up.

Note the Los Angeles Times' characterization of Mexico in chaos; it describes a failed state perfectly:

Swaths of Sinaloa periodically become no-go zones for outsiders; the central government abdicated control long ago. By one estimate, 32 towns are run by gangsters.

In Culiacan, the capital, casinos outnumber libraries, and dealerships for yachts and Hummers cater to the inexplicably wealthy.

This is where narco folklore started, with songs and icons that pay homage to gangsters, and where children want to grow up to be traffickers. How Sinaloa confronts its own divided soul offers insight on where the drug war may be going for Mexico, where more than 5,000 people have been killed in drug-related violence this year.

"The monster has lost all proportion," said Del Rincon, who is a member of the conservative National Action Party.

A spunky woman with large eyes and hands that seem to be in constant motion, Del Rincon scans other tables at cafes where she meets people, making sure she knows who is within earshot; she lowers her voice when she names names. Her husband and closest confidant keeps tabs on her whereabouts throughout each day.

Such are the risks of speaking out.

The level of corruption and social pathology can hardly be overstated. And this narco-state is our southern neighbor, where Washington leaves the doors to America wide open to Mexican criminals and assorted others.

More than 100 police officers have been killed in Sinaloa this year, most of them gunned down. Countless others have fled, or taken bribes and changed sides. As much as 70% of the local police force has come under the sway of traffickers, by some estimates. [...]

Then those same streets turn into a shooting gallery. Gunmen in dark-windowed SUVs open fire on rivals or cops, day or night. Five federal and state policemen were killed in a hail of bullets on Culiacan's prominent Emiliano Zapata Boulevard one recent night. The truck with their bloodied corpses came to rest outside a busy casino under blue and purple neon lights and fake palm trees. It was the third time in recent weeks that an entire squad of agents was wiped out in an ambush. No one is ever arrested; shootings, even of cops, are hardly investigated.

"Twenty years ago we knew of the handful of big mafia dons, but they were discreet," Rodriguez said. "Today we are dealing with the apprentices, who want to get rich very fast, who commit enormous excesses, who want to be noticed."

Despite the hand-wringing of this LA Times article, just two months ago the very same paper reported that locals missed the easy money of narco-business: Culiacan, Mexico, feels the pain of a drug-induced recession. (See my blog at the time commenting on the crime-loving Mexicans of Sinaloa, Some Mexicans Unhappy with Improved Law and Order.)

Mexicans' admiration of the dark side is illustrated by the elevation of a common crimal, Jesus Malverde, to the status of being an odd sort of secular saint, worshipped by drug traffickers.

"Jesus, help me, bro', to get my next drug load across. Check out this nice votive candle I lit for you." * 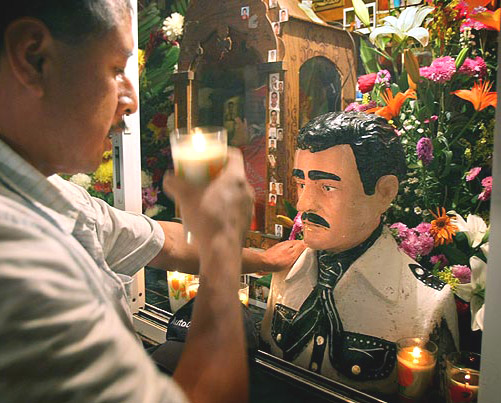