Some Mexicans Unhappy with Improved Law and Order

In most parts of Mexico, Presidente Calderon's two-year crackdown on powerful drug cartels has been a dismal failure. But in the community of Culiacan, on Mexico's west coast facing Baja, there has been some success. Not all residents are satisfied, however.

Law enforcement's effective smackdown on traffickers has caused a shrinkage of the drug-connected legal economy. Some Mexicans are unhappy with the resulting narco-recession and miss the good old days of illegal drugs and money. There's just no pleasing some people!

The hardest-hit enterprises in this recession are the purveyors of the typical narco's favorite toys and pursuits: Flight schools. Yacht and luxury-car dealerships. Dollar-changers. Love-in-the-afternoon motels. Even the Jesus Malverde temple. 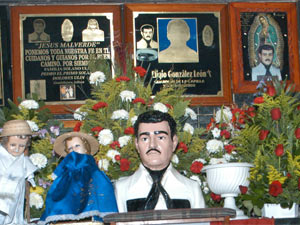 A mustachioed Robin Hood figure in Mexican folklore, Malverde is considered the patron saint of the thousands of people who dedicate themselves to smuggling and merchandising cocaine, marijuana and methamphetamine.

In boom times, admirers and believers swarm the shrine erected here in Malverde's honor. They paper the building's walls with photographs of themselves (sometimes with their guns, multiple cellphones and snakeskin cowboy boots showing) in an effort to seek his blessing. They hang plaques praying the saint will protect them on their "journey" from Culiacan to San Diego or Chicago — their smuggling routes.

The temple was deserted during a recent visit save for Dona Tere, a caretaker, and a couple of forlorn souvenir salesmen who hawk candles, Malverde key chains and painted busts in all sizes of the not quite Vatican-approved saint. [Culiacan, Mexico, feels the pain of a drug-induced recession, LA Times, Oct 21, 2008]

Oh no! Not Jesus Malverde, the beloved crime icon of drug smugglers — how tragic that his unique powers are no longer valued!

True to Mexico's fondness for crime, some residents wish law enforcement would scram and let Culiacan return to a narco-boom economy:

"We can't stand the guachos," said a fat man with a fatter gold watch, using a slang term for the soldiers. His eyes darted back and forth on Benito Juarez Street in search of a potential customer: a car that might slow, its passengers with dollars to sell. There were none.

"At least the narcos gave us work," he said.

Nice people, these Mexicans — just the kind of law-respecting immigrants we want in the United States!