A Mexican Crime Icon Is Recognized

Jesus Malverde was a legendary thief in Mexican folklore, possibly a historical figure or an amalgam, whose image has grown from a modest shrine in rural Mexico to a larger audience, carried north by Mexican criminals who believe trinkets portraying the patron saint of drug smuggling will protect them. (A belief which is very helpful for police, incidentally.)

Mexican marketing experts recently chose Malverde for a new beer identity because he was "the most recognizable and admired figure in focus groups." Apparently their research was accurate, since drug smugglers now swill the new Malverde beer "like holy water." As a result of its growing presence, the Jesus Malverde image has been recognized as a genuine cultural icon by the New York Times.

What a long strange trip it's been for the Narco Saint of Sinaloa: Mexican Robin Hood Figure Gains a Kind of Notoriety in U.S. (New York Times, Feb 8, 2008).

Now, immigrants have brought his legend to the United States. His image, which is thought to offer protection from the law, can be found on items that include T-shirts and household cleaners.

Malverde is widely considered the patron saint of drug dealers, say law enforcement officials and experts on Mexican culture. A shrine has been erected atop his grave in the remote city of Culiac??n in the Mexican state of Sinaloa, which has long been associated with opium and marijuana trafficking.

”The drug guys go to the shrine and ask for assistance and come back in big cars and with stacks of money to give thanks,” said James H. Creechan, a Canadian sociologist and adjunct professor at the Autonomous University of Sinaloa in Culiac??n. [...]

”The appeal of Jes??s Malverde is that he was a nonconformist,” said Guillermo Avil?©s-Rodr?­guez, artistic director of the Watts Village Theater. That the Roman Catholic Church does not recognize Malverde as a saint fits his outsider image.

”There’s a beauty to that, because it was the people who decided he was a saint,” Mr. Avil?©s-Rodr?­guez said. ”He represents the belief, power and will of the people.”

Only crime-loving Mexico could elevate a low-rent criminal to sainthood. Chicago admired Al Capone back in the day for his bootlegging acumen, but no one there ever suggested that he deserved a halo.

These days, Jesus Malverde shares the stage (and store shelves) with a mainline saint, the Virgin of Guadalupe (aka "patronness of the Americas"!), who shows up wherever Mexicans are marking territory.

Below, a Compton, California, store displays Mexican paraphernalia for sale. 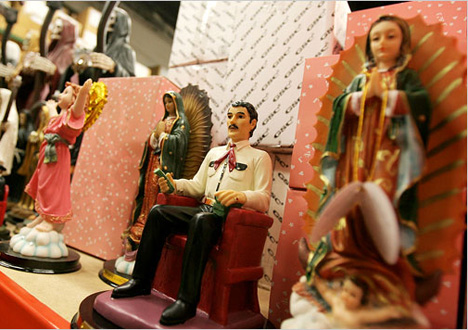