Bad is going to worse in Mexico border towns. When police chiefs flee to the USA for asylum and cartels can mass murder at will, it's anarchy. AKA, a failed state.

In Ciudad Juarez, at least 14 people were murdered in 24 hours, following a terrorizing threat that the weekend would be the bloodiest one in memory. Needless to say, that sort of thing tends to make people stay away and not engage in normal life and business in the city. Cartel violence has closed businesses in Tijuana as well.

Back to Juarez: Border Violence (Dallas Morning News, By Alfredo Corchado, May 25, 2008).

The city across the border from El Paso was on red alert Saturday, and the mayor said extra forces were on duty.

"I can't recall a more grave time in Ju??rez," said Alfredo Quijano, editor of the newspaper Norte de Ciudad Ju??rez. "We've had other massacres ... but never anything like this."

The hysteria began Thursday with an e-mail warning that gunmen would fire at malls and restaurants and threatening "killings all over the city."

On Friday night, El Paso's TV stations and the El Paso Times reported about the e-mail, deepening the alarm on the U.S. side of the border.

"I've cut my trips short to Ju??rez because of long bridge lines and killings there," said El Paso resident Oscar Rodriguez, 34, a telemarketing specialist. "But with this, I'll be crazy to return to Ju??rez anytime soon. It's crazy. Where is the rule of law?"

Where indeed? Certainly not in Mexico.

Below, a map of the cartels which are battling each other and Mexico City for control of territory. 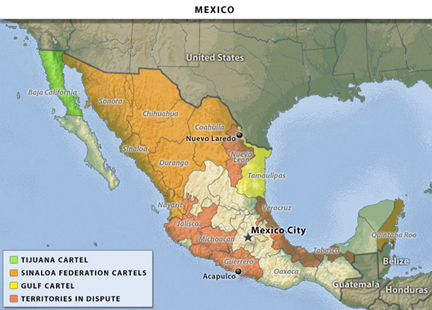