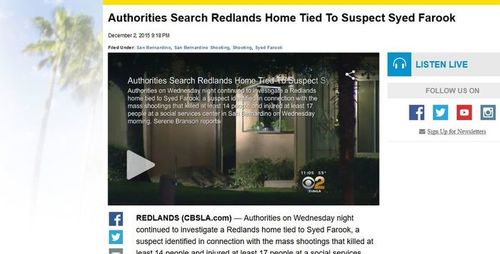 San Bernardino: Another Triumph in the War on Racial Profiling

From CBS in Los Angeles:

A man who has been working in the area said he noticed a half-dozen Middle Eastern men in the area in recent weeks, but decided not to report anything since he did not wish to racially profile those people.

“We sat around lunch thinking, ‘What were they doing around the neighborhood?’” he said. “We’d see them leave where they’re raiding the apartment.”

There’s a more vivid example of the Dominant Mindset of the Age in Action from 9/11:

At this point, I don’t want to debate specific actions, but just call attention to the zeitgeist of the War on Noticing.

But if you adopt a rule that you will never ever allow yourself to overcompensate to the right, you will, on average undercompensate, and these errors will build up pushing you on average toward the left. Eventually, you will inevitably wind up over the line on the left with oncoming traffic headed your way.

So, you need to be neutral and not biased against either the right or left.

But then I’m a wacko rightist extremist, so I would say that, wouldn’t I?

It’s like how I’m always quoting Will Rogers: The first thing to do when you find yourself in a hole is to stop digging. All respectable opinion knows that the proper response to two Muslims going jihad on their workplace is that we must redouble our efforts to diversify America through even more immigration.