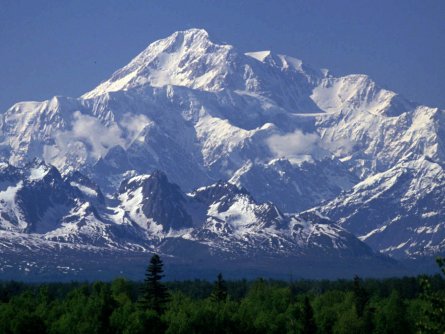 Mount McKinley And The Onomastic Cringe

The Obama administration, in the person of Interior Secretary Sally Jewell, has changed the name of the U.S.A.'s highest mountain from Mount McKinley to Denali. [Order 3337, PDF]We are told that Denali was the original Eskimo name — the mountain's in Alaska — in, quote from every news source I've consulted, quote: "the Athabaskan language."

First off, there is no such thing as "the Athabaskan language." According to my Cambridge Encyclopedia of Language, Athabaskan is the name of a language family containing many different languages, as different from each other as French and Russian, both members of the Indo-European family.

On the general point of renaming things for political reasons, I wrote about this phenomenon fifteen years ago in The Weekly Standard, and suggested a name for it: the onomastic cringe.

Onomastics is the science of names; the cringe is the posture you adopt when confronted with your moral superiors — anyone not white-European, for example, like the Eskimos of Alaska.

Having already written about the onomastic cringe, I can just quote myself. Whaddya want, original copy? Ha!

In my column I had just gotten through noting that Gypsies were now Roma, Peking was Beijing, Lapps were Saami, Bombay was Mumbai, and Hottentots were San. OK, quote from myself back in a.d. 2000, quote:

Damn whatever committee of the U.N. is foisting this gibberish on us! To hell with them and all their works! GYPSIES! PEKING! LAPPS! BOMBAY! HOTTENTOTS! Come and get me, you bastards!