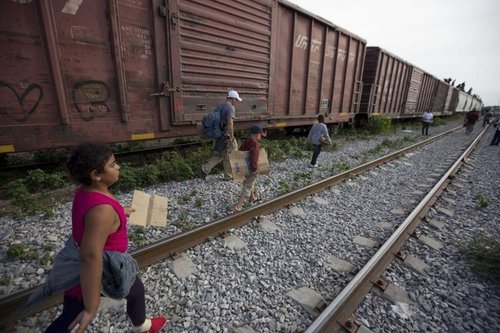 If you read my piece about Central Americans endangering their children, here's more, emphasis added:

ARRIAGA, Mexico—Esther Vasquez arrived in this dusty town in southern Mexico on a recent day to jump a freight train with her young son in hopes of eventually making it into the U.S. She said she hadn't been deterred by dangers, even after she and her 10-year-old son Oscar were briefly kidnapped by a Central American gang.

To give you a comparison with American standards of not risking children's lives, an American woman was arrested for letting her 11-year old sit in a car.

Apparently, immigration enforcement, now minimal rather than nonexistent, is deterring this woman when the risk of life (to herself and her son) won't.

But now, Ms. Vazquez isn't sure the journey is worthwhile, thanks to the rapid spread of news that the U.S. is speedily deporting undocumented Central American families. A rise in deportations in the past two weeks anchor a broader international effort to stem the flood of child migrants across the Rio Grande that has spawned a humanitarian crisis and a U.S. political brawl over immigration.

The WSJ has a graphic about how much it costs to sneak into the US in order to be in a position to steal American money. 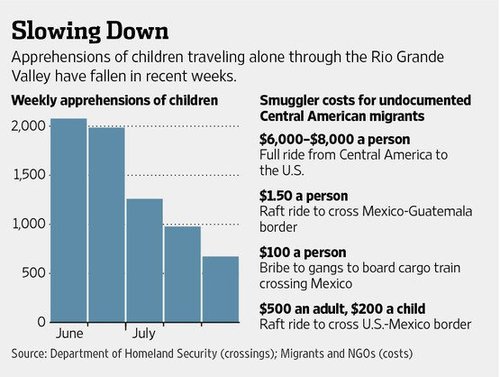 Notice the reference to rafting across the Rio Grande? If she's lucky, she and her son will have life jackets for that. They frequently find life jackets on the northern shore of the river. If she's not...

“The life jackets helped many make it across the Rio Grande from Reynosa, the Mexican city across the water from Mission, just west of McAllen. Sources say they come over on rafts ferried by the so-called “coyotes,” the human smugglers whose means of transport are rendered useless whenever discovered by the Border Patrol. Many don’t make it across the river; multiple sources became emotional when recounting their discoveries of small, lifeless bodies washed up along the riverbank.”

Immigration enforcement can prevent that. When it doesn't, the parent should be sent to prison.