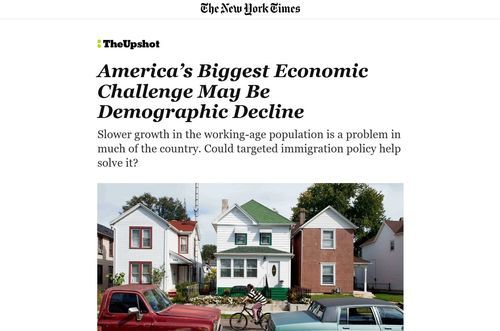 More Immigration: What Can't It Cure?

Slower growth in the working-age population is a problem in much of the country. Could targeted immigration policy help solve it?

For many years, American economists have spoken of Japan and Western Europe as places where the slow grind of demographic change — masses of workers reaching retirement age, and smaller generations replacing them — has been a major drag on the economy.

But it is increasingly outdated to think of that as a problem for other countries. The deepest challenge for the United States economy may really be about demographics. …

A new report from the Economic Innovation Group, a Washington think tank funded in large part by tech investors and entrepreneurs

So you just know that they have the average American’s best interests at heart.

, adds rich new detail, showing that parts of the United States are already grappling with Japanese-caliber demographic decline — 41 percent of American counties with a combined population of 38 million.

At the national level, slower growth in America’s working-age population is a major reason that mainstream forecasters now expect the economy to expand around 2 percent each year rather than the 3 percent common in the second half of the 20th century.

And with the Soviet Union’s population at 293 million, it’s essential that America get a bigger population in order to survive in the Cold War by mass-producing B-1 Bombers.

You know, New York Times, there is this concept called “per capita” that’s useful for thinking about topics like this.

… Many younger workers move to bustling urban centers on the coasts, leaving smaller cities and rural areas behind. Immigrants bolster the labor force but also disproportionately go to those same big coastal cities.

“Dayton’s height of population was 1953, and we’ve seen stagnant growth for the region since 1990,” said Nan Whaley, the mayor of the Ohio city. …

Over all, 80 percent of American counties encompassing 149 million people experienced a decline in the number of residents ages 25 to 54 between 2007 and 2017, according to the paper, which was written by Adam Ozimek of Moody’s Analytics and Kenan Fikri and John Lettieri of the Economic Innovation Group.

They project that the trends will continue, and that by 2037, two-thirds of American counties will have fewer adults of prime working age than they did in 1997, despite overall population growth in that period. (Their projections tried to take into account undocumented immigrants.)

Policies to encourage American families to have more children would help over the long run by increasing the supply of potential workers in the future. So could efforts to ensure that even struggling cities have the kinds of amenities young families desire, particularly good schools.

But people who study regional economies are increasingly concerned that some aspects of this wave of demographic change make the pain more severe for places left behind — which can get stuck in a vicious cycle.

Pain for whom? Capital? Workers? The Reserve Army of the Unemployed?

Raj Chetty’s 2015 study of where was the best place to raise working class kids found that the best counties were overwhelmingly ones that did not have rapidly growing populations.

… A shrinking supply of working-age people can prompt employers to look elsewhere to expand, making it harder for local governments to raise enough taxes to pay for infrastructure and education, and encouraging those younger people who remain to head elsewhere for more opportunity.

Even worse, employers might have to pay their workers more. And We.Can’t.Have.That.

… The authors of the E.I.G. report suggest a potential solution: an immigration policy that would stop the vicious cycle. They propose that visas could be made available to skilled immigrants on the condition they go to one of the areas struggling with demographic decline.

And of course the immigrants will stay in Dayton and never ever move to Dallas, just like they promised. As New York Times subscribers all know, it’s impossible to stop foreigners from moving to America but it’s easy to stop them from moving within America. You just ask them nicely. They will be happy to oblige.