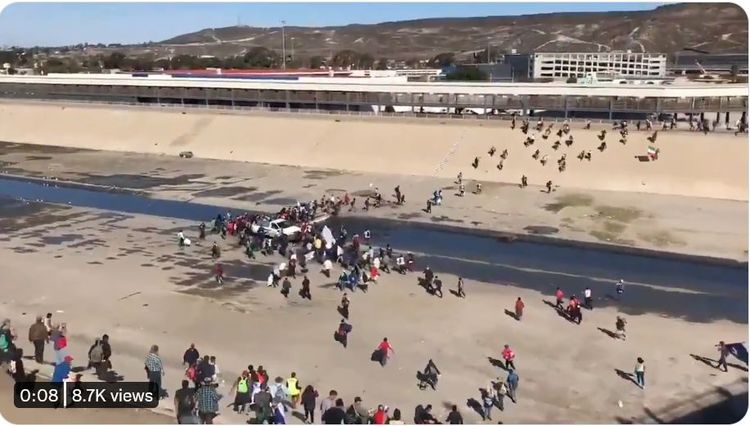 Remember all the reporters saying this would never happen? How President Trump's references to the caravan were just an "election stunt"?

US forces closed border and firing tear gas. They also got permission from President Trump to use "lethal force".

Notice the Honduran flag being flown by the caravan. A column of invaders storming the border under foreign flags in violation of American law; if this isn't an invasion, what is?

Images and videos posted on social media Sunday afternoon appeared to show hundreds of migrants from the leading Central American caravan pushing past Mexican riot police and rushing the border at the port of entry in San Ysidro, Calif., in a major test for both U.S. border authorities and Mexican officials.

U.S. Customs and Border Protection officials have suspended northbound and southbound vehicle and pedestrian crossings at the San Ysidro port of entry, officials told Fox News, and tear gas was apparently being fired from the U.S. side of the border. It was not immediately clear if any members of the caravan made it past the port of entry into the United States.

Fox News had confirmed early Sunday through an organizer for Pueblo Sin Fronteras, the group helping organize the leading Central American migrant caravan, that members of the caravan were planning to attempt to cross the port of entry at San Ysidro later in the day.