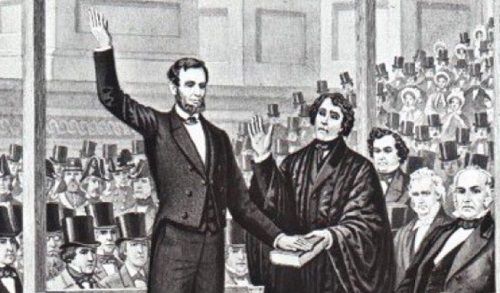 Others besides myself found the pretentious preening in Lincoln regalia which characterized the Obama Coronation to be historically illiterate and politically reprehensible.

The remarkable Walter E. Williams focused on the hypocrisy of the Emancipation Proclamation in freeing slaves only in the areas the federal Government did not control. Why emulate Abe Lincoln? World Net Daily January 21 2009 opens:

President Obama was sworn into office placing his hand on Abraham Lincoln's Bible. That is the last Bible I would use to be sworn into office. You say, "Why? Didn't Lincoln's Emancipation Proclamation free your ancestors?" It all depends where they were living. Let's examine the document's text to see why.

Williams then discusses with considerable scholarship the extensive exceptions to the effect of the Proclamation, and the fact that observers at the time were very aware of them:

The hypocrisy of Lincoln's Emancipation Proclamation came in for heavy criticism. His Secretary of State William Seward said, "We show our sympathy with slavery by emancipating slaves where we cannot reach them and holding them in bondage where we can set them free." The London Spectator mocked, "The principle (of the Proclamation) is not that a human being cannot justly own another, but that he cannot own him unless he is loyal to the United States."

Williams points out the Obama crowd's hero was a flagrant and repeated violator of the Constitution:

The recognition that slavery is a despicable institution does not require hero worship of a president who made the largest contribution to the unraveling of our Constitution. After all, when it is settled by brute force that states cannot secede, as they thought they had the right to in 1787, then the federal government can ride roughshod over states and their people's right — in a word make meaningless the Ninth and 10th Amendments.

Another fine piece comes from Canada: Honest Abe's spending legacy is a cautionary tale, Neil Reynolds, Globe and Mail January 21, 2009 This is an extremely lucid exposition of the central theme of Tom DiLorenzo's wonderful The Real Lincoln

- that Lincoln's primary interest was a massive wealth transfer from the South to the North by tariffs:

In 1860, the United States had one of the lowest tariff schedules in the world (average rate: 17 per cent). In 1861, it raised tariffs twice, the first time to 26 per cent, the second time to 36 per cent. In 1862, it raised tariffs to 48 per cent and levied them on a much broader range of goods (including every single farm crop). They remained in effect until the First World War.

Economists say 80 per cent of the costs imposed by these tariffs fell on the import-dependent southern states. In his inaugural speech, Lincoln explicitly promised these states that he would not invade them  - provided they paid all "the duties and imposts" that the federal government levied on them.

Perhaps more instructive of Lincoln's economic instincts, though, was his commitment to the internal improvement system. Railways and canals were the fashionable infrastructure projects of the time...and the great American debate in the years preceding the Civil War was less about slavery than about using public debt to fund the laying of private railway track.

Myths are always dangerous, but myths based on lies are especially so.Unquestionably Obama has benefited from the Noble Negro lie exemplified by the canonisation of St Martin Luther King.

Lincoln worship has encouraged a careless attitude to the Constitution and the toleration of an autocratic Presidency. And misrepresentation of the cause of the Civil War has facilitated the root problem of American politics: the delegitimization of the right and duty of white Americans to defend their own interests.