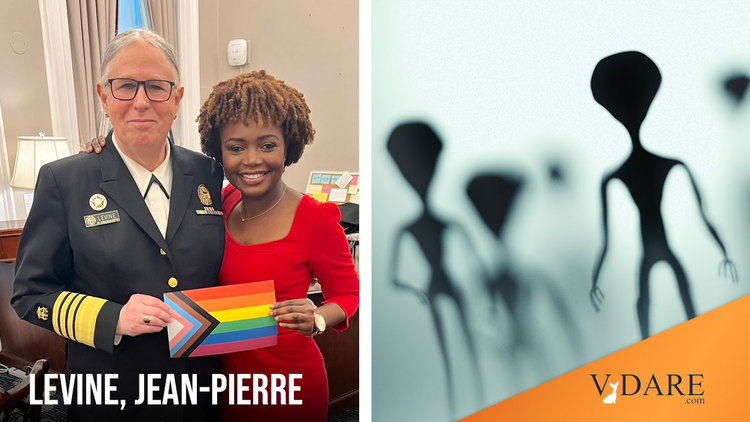 America used to have a giant radio telescope at Arecibo in Puerto Rico, but it collapsed in 2020 for reasons.

Now the Chinese tell us that maybe (or maybe not) they heard intelligent space aliens on their giant radio telescope.

Three days ago I wrote:

And now, here they are:

When the 1st openly gay @PressSec and the 1st openly trans @HHS_ASH & four-star admiral meet at the @WhiteHouse during #Pride. Proud to be a part of an administration where everyone can see themselves reflected in leadership. We've come so far. Here's to shattering more ceilings. pic.twitter.com/2XYdK8lJfr

Admiral Levine isn’t even trying anymore to look like a woman. He’s gotten totally into wearing his admiral’s uniform. Shaving every morning is about as far as Admiral Levine will go to try to look feminine these days. Groundskeeper Willie in his kilt looks more female.

This tweet gives me total confidence in the ultimate triumph of the human race over the space aliens.

Well, at least the space aliens, being many lightyears away, won’t hear about Monkeypox Pride Month for many years, not until long after I’m gone.

As for you young ‘uns, well, best of luck! After all, sending an interstellar fleet of conquest will likely take centuries if not millennia, so there’s nothing to worry about.