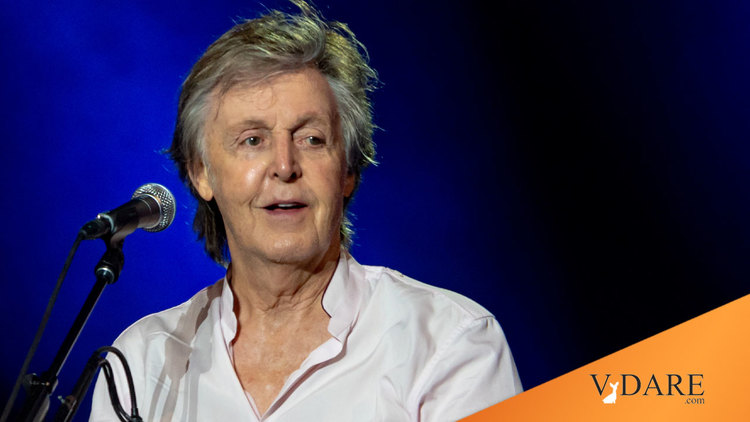 My wife went to see Paul McCartney last month. She reports that Sir Paul still sings remarkably well despite being then almost an octogenarian, and put on quite a show.

That got me thinking: Out of all living humans, which one has directly generated more minutes of human happiness in the billions of individual humans?

By “directly” I mean: while watching or listening to them, rather than by being influenced more indirectly via technological innovation or political/cultural influence. Hence, likely an entertainer, an author, or similar.

My guess is that by this measure, McCartney is out in front by quite a bit. Who’d be second among popular musicians among the still living? Elton John? Stevie Wonder? Of course, this depends upon how much you credit McCartney for your enjoyment of The Beatles. (I’m not much of a Wings fan, although evidently a lot of people were.) I’d say 50%, maybe a little more. But I came in late to The Beatles, when Paul was on top, buying Hey Jude as my first single and Let It Be as my first album.

Likewise, what percentage of your enjoyment of, say, Raiders of the Lost Ark do you credit to Steven Spielberg, who is obviously number one among living film directors in pleasing the most people the most times?

And how many times do you watch a great movie as opposed to hear Hey Jude on the radio? Personally, I don’t rewatch movies all that much, seldom more than three times. (The fourth time I watched The Big Lebowski I found I was tired of it, and I really like The Big Lebowski.) By my count, I’ve watched Spielberg movies 37 times going back to Duel on TV over 50 years ago (an awesome Saturday Night Movie of the Week), so that’s about 80 hours.

Authors deserve close to 100%, so J.K. Rowling or Stephen King might be contenders.

Every country has TV presenter stars who have an immensely long career like Barbara Walters in the U.S. But they aren’t international the way the Beatles were.

Among pre-rock singers, we still have with us Tony Bennett, Harry Belafonte, and Johnny Mathis. But I would think you’d need to be a Sinatra or Crosby to rival McCartney.

This is not a test of influence on other artists, so Bob Dylan isn’t in the running.

Is there anybody else who is close? If there is, it’s probably an Asian, perhaps some Bollywood star I’ve barely heard of. If I had to guess, I’d say Jackie Chan.