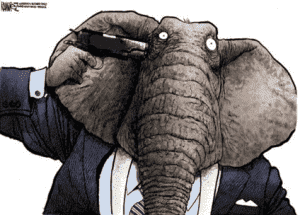 What happened in Mississippi yesterday is very clear. The left-sympathetic National Journal puts it bluntly:

There was clear evidence that Cochran's attempt to boost Democratic African-American turnout paid off in a big way. In Jackson's Hinds County, where two-thirds of the population is black, Cochran won 73 percent of the vote, 7 points higher than his performance in the primary. Turnout was up significantly in heavily African-American counties in the Mississippi Delta…

The New York Times reported that the leading pro-Cochran super PAC, Mississippi Conservatives, paid African-American leaders to get out the vote for the senator in the runoff.

The evening’s Republican primaries, led by Mississippi, will have deepest consequences for the ideological and partisan battle lines of the fall campaign. The outcome seems to represent a triumph of the GOP establishment by any means necessary

A major benefit in this sorry and insalubrious mess is that RedState’s Erick Erickson has become very outspoken in voicing extremely dark conclusions.

A Republican Party campaigning on making the Senate “conservative,” used liberal Democrats to preserve an incumbent Republican and defeat a conservative. The actual conservatives are the outsiders with the GOP establishment doing all it could to preserve its power at the expense of its principles…

The great lesson from Mississippi is that Republican means, more or less, that if elected the party will reward its major donors, who are just different than the Democrats’ major donors. Policy differences are about different donors, not an actual agenda to shift the country in a different direction.

The establishment plays for keeps. Their income is dependent on doing so. A McDaniel win would have disrupted the flow of money and redirected  crony capitalist agenda through which many make millions.

I’m just not sure what the Republican Party really stands for any more other than telling Obama no and telling our own corporate interests yes. That’s not much of a platform.

Erickson has been showing signs of wisdom for some time ,but this vitriol is a Light Year from the Republipoodle Red State of the Bush years.

VDARE.com has long been alert to the corruption piped into the GOP via the Lobbyist/Consultant conduit. But more is involved. As I remarked after the North Carolina primaries

Turning the GOP into the AdelZuck party (H/T Talk Radio Listener) is a sure loser.

The sick thing is that those buying this disaster do not care. The Democrats will just as readily obey them on foreign policy and Amnesty and they prevent the otherwise inevitable evolution of the GOP into the Generic American Party – which may well be their true objective.

The Consultants/Super PAC operators do not care either: they get rich in the process.