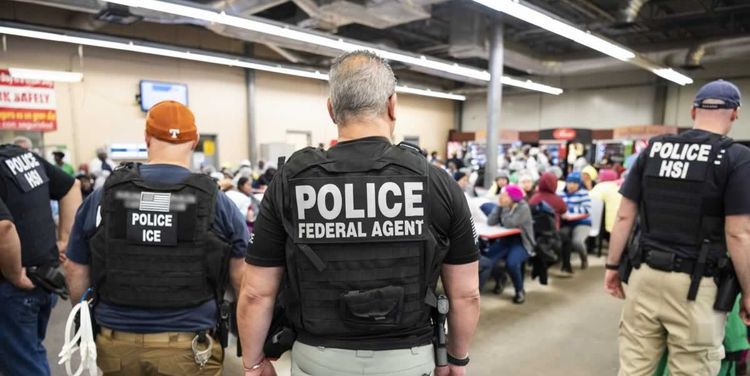 Over in the mainstream media, there’s no crime worse than a Republican president enforcing the law against the left’s favorite victims, illegal aliens. The arrests earlier this week consisted of a few hundred job thieves who were unlawfully employed in Mississippi food-processing plants, so that action would presumably open up hundreds of jobs for American workers. A recent chart from the Bureau of Labor Statistics showed Mississippi as having the second worst unemployment rate among the states as of June, 5 percent, so that would be good news for anyone caring about Americans, right?

Not for everyone, judging by Saturday’s Los Angeles Times front page, which featured a sob story about the suffering children with the requisite “tears rolling down.” 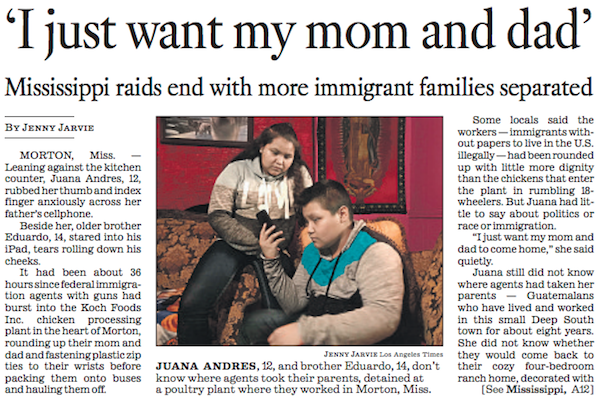 Funny, I don’t recall any sob story journalism back when President Obama was deporting more illegal aliens than President Trump. Open-border types called BHO the “Deporter in Chief” back in 2014 before there was a Trump to blame for everything.

Memories are short in the newsroom.

Elsewhere, United States Attorney for the Southern District of Mississippi Michael Hurst stated, “We are unaware of a single child that is without a parent today.” All aliens who said they had a minor kid were released, around 300 out of 680.

So perhaps the media squealing is a little overblown. You never hear this sort of caterwauling about American kids whose parent is arrested — the extreme shrieking is utilized only when the liberal media wants to bash Trump.

Plus, if there were a employment visa category for newsroom workers, the scribblers might be more sympathetic to other Americans who have been negatively affected by excessive legal and illegal immigration. But the real harm to citizens is never mentioned in these emotional stories, which are really political tracts, aimed at wearing down the loyalty of the citizens to law and sovereignty.

The Times article was reprinted in the Morning Call paper of Allentown, Pennsylvania, so click away:

Leaning against the kitchen counter, Juana Andres, 12, rubbed her thumb and index finger anxiously across her father’s cellphone.

Beside her, older brother Eduardo, 14, stared into his iPad, tears rolling down his cheeks.

It had been about 36 hours since federal immigration agents with guns had burst into the Koch Foods Inc. chicken processing plant in the heart of Morton, Miss., rounding up their mom and dad and fastening plastic zip ties to their wrists before packing them onto buses and hauling them off.

Some locals said the workers — immigrants without papers to live in the U.S. illegally — had been rounded up with little more dignity than the chickens that enter the plant in rumbling 18-wheelers. But Juana had little to say about politics or race or immigration.

“I just want my mom and dad to come home,” she said quietly.

Juana still did not know where federal agents had taken her parents — Guatemalans who have lived and worked in this small Deep South town for about eight years. She did not know whether they would come back to their cozy four-bedroom ranch home, decorated with lavish shrines to the Lady of Guadelupe [sic], red and green Christmas baubles, plush toys and cherub figurines.

Her dad’s old AT&T phone was their only lifeline.

Hours after her mom and dad were taken away, it buzzed with an unknown number and Juana quickly handed it over to her uncle Pedro.

It was her mom. Sobbing, Ana Andres delivered a simple message to her brother: “Take care of the kids and give them food.”

A sixth-grader, Juana had just started her second day back at middle school Wednesday when federal agents poured into the sprawling Koch Foods plant just a block away. As the tardy bell rang and she settled into her math class, her dad was finishing up his night shift and her mom starting her work day.

In a scene that played out at poultry and other food-processing plants across Mississippi, federal agents gathered hundreds of other Latino workers into rooms to question them and screen for anyone who was in the U.S. illegally. Across the state, about 680 workers were detained in the largest workplace raid in a decade.

Nowhere was the anguish more visible than in Morton, population 3,600. After 200 workers were detained, anxious families gathered in the sweltering heat outside the hulking plant, an ugly patchwork of corrugated metal buildings and trailers sealed off from the rest of the town by a strip of chain-link fence.

“Government, please show some heart,” an 11-year-old girl sobbed in a widely shared video. “Let my parents be free like everybody else, please…. I need my dad and mommy.” (Continues)

The parents can be “free like everybody else” in their home countries. The US cannot be the welfare office and job shop for the Third World when there are billions on earth who might like a “better life” in this country.