Candidate Joe Biden is such a fascinating gaffe machine that sometimes his serious policy quotes get overlooked. He had one a few days ago when he was speaking to the Asian Latino Coalition, where he uttered the much-reported Bidenism, “Poor kids are just as bright as white kids.” 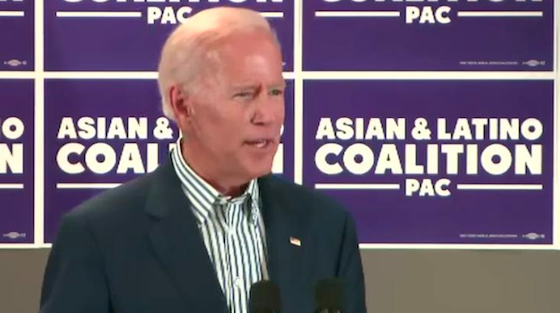 At the same event, he supported the idea of nearly doubling legal immigration every year, just because America could do it.

JOE BIDEN: We could afford to take in a heartbeat another two million people. The idea that a country of 330 million people cannot absorb people who are in desperate need and who are justifiably fleeing oppression is absolutely bizarre, absolutely bizarre. I would also move to increase the total number of immigrants able to come to the United States.

Has there been a clamor among the public for greatly increased immigration, even though America is by far the world’s most generous receiver? Would a doubling of immigration benefit the American people?

Many schools are already being overwhelmed by foreign students, wages are decreased from the marketplace being flooded with foreign workers willing to work cheap and worsened congestion shows up on highways and public transportation built for a far smaller population.

Unfortunately, candidate Biden is not the only one thinking of increasing immigration: President Trump recently voiced support for “millions” more immigrants:

That’s not what many Trump supporters had in mind, and why should they? In 2017, for example, President Trump supported the RAISE Act presented by Senators Tom Cotton and David Perdue which would cut legal immigration by half.