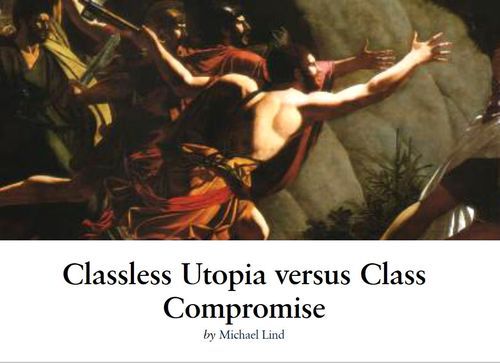 The elimination of largely hereditary social classes is unlikely. For generations or ages to come, most people in the United States and other technologically advanced societies will be assigned by birth to the status of managers or proletarians, and only a minority will move up or down. If there is not to be perpetual conflict among these two broad classes, the class war must come to an end in one of two ways.

One possibility is that there will be a cross-class compromise, embodied in a new class warfare constitution that allows working-class majorities at least partly and imperfectly to check the domination of the managerial minority. The updated class warfare constitution should be a virtual one, like those of the Western democracies from World War II until the end of the Cold War: an informal, extragovernmental, extraconstitutional system of institutions rooted in the autonomous private and public institutions of the working-class national majority, and providing the working class with greater collective bargaining power in employment and politics.

The other possibility, perhaps more likely, is that today’s class war will come to an end when the managerial minority, with its near-monopoly of wealth, political power, expertise, and media influence, completely and successfully represses the numerically greater but politically weaker working-class majority. If that is the case, the future North America and Europe may look a lot like Brazil and Mexico, with nepotistic oligarchies clustered in a few fashionable metropolitan areas but surrounded by a derelict, depopulated, and despised “hinterland.”