Our narco-neighbor to the south is in a regular tizzy about Donald Trump for reminding Americans of what a lawless hellhole it is and why keeping them out with a wall is a good idea. Like many a useless government, the first move was to think “image makeover” rather than deal with actual problems.

RUSH: Mexico ‘Driven Up The Wall’ By Trump

RUSH: Look at this headline. I mean, there’s all kinds of little nuggets out there. “Driven Up the Wall by Trump, Mexico Looks to Recast Image in US.” This is a Reuters story. Why, some might say whatever Trump is doing is already getting results. Page two of this story: Mexican officials say that Republicans told them they will take care of Trump.

Let’s see what this story has to say here. “At first, Mexico’s government did its best to ignore Donald Trump. Then it likened him to Adolf Hitler. Now it has appointed a new ambassador to come up with a better plan. Fed up with the front-runner for the Republican presidential nomination labeling Mexico as a cradle of drug-runners, job poachers and rapists, the government is sending in respected diplomat Carlos Sada to lead a fightback.

“Mexico’s new ambassador in Washington, Sada acknowledges his country has neglected its image across the border and aims to fix that with PR and media campaigns, and by lobbying prominent US companies, lawmakers and civic leaders.” (continues)

Meanwhile, Mexico has more serious problems than accurate trashtalk. An international panel just handed in a disturbing report about the 43 college students who went missing in 2014 (something I reported at the time: Mexico: 43 Disappeared Students Highlight Deep-Seated Lawlessness). The upshot is that a brutal mass murder happened, but the government blocked the panel’s investigation to determine details.

This video report seems to have pertinent facts — which remain sketchy even after two years of investigations:

Here are a few headlines from the last couple days: 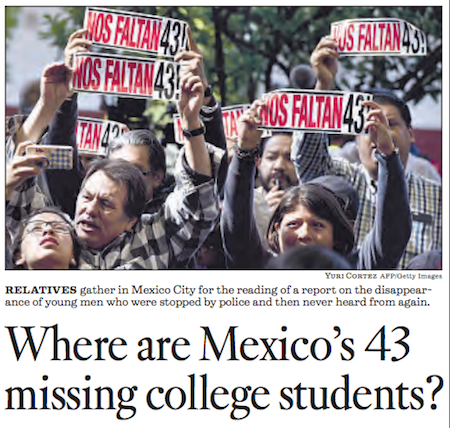 Political correctness represses much of the truth about Mexico — that it is a barbaric and violent society where 43 students can be murdered with no government accountability or even explanation. Donald Trump is the least of Mexico’s problems and his mention of Mexican alien crimes only skims the surface of the rot.