"Athwart History"—NR Goes Back In Time To 1952, Changes Sides On Eisenhower, Taft, And Affirm The Liberal Narrative

In attempting find arguments to justify the open conspiracy against Trump, NR found a conservative academic  to talk about the Eisenhower-Taft Primary battle of 1952. Eisenhower, the unconservative candidate was nominated over the conservative Taft by party kingmakers, and accusations by Eisenhower's handlers that Taft was attempting to steal delegates.

NRO is retrospectively supporting this accusation, in order to say that Cruz isn't a thief...Robert Taft was.

Diana West Tweeted on this: 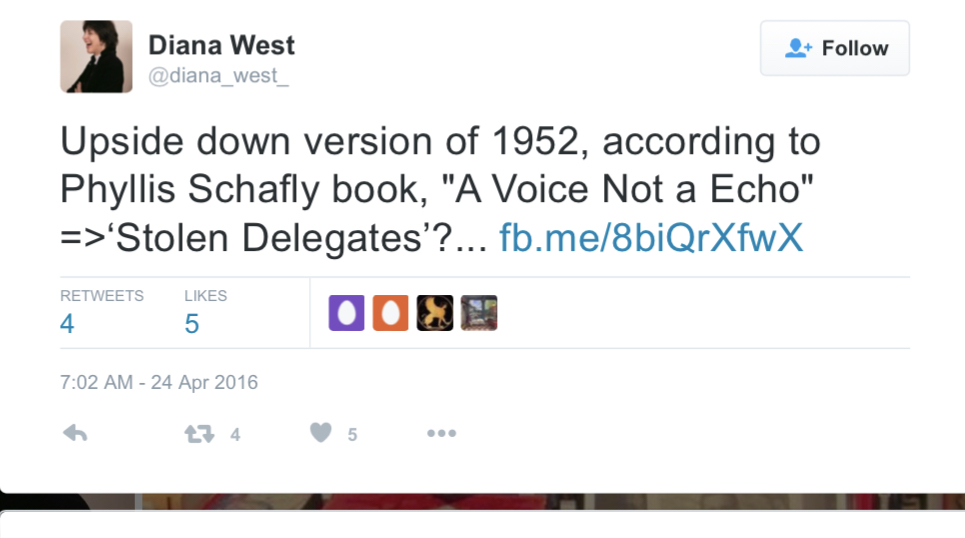 You can read Phyllis Schlafly's 1964 classic  A Choice Not An Echo online, and Chapter 5 is called "The Big Steal."

The first newspaper to shout "the big steal" was the HOUSTON POST, whose owner, Oveta Culp Hobby,  was later rewarded by appointment as Secretary of Health, Education and Welfare. Suddenly, as though someone had pressed a button, the whole propaganda apparatus of our country went into action to slander the character of the most honorable man in public life. Our whole communications media echoed with the slogan "Thou shalt not steal." The "big steal" issue was expanded to take in

Georgia and Louisiana, too. TIME Magazine came out with a special edition on Monday of Convention week so that every Delegate could be provided with the issue accusing Taft of the "big steal". Masked bandits with guns paraded the streets of Chicago [where the convention was held] carrying placards which read "Taft steals votes", and oversize signs appeared proclaiming RAT stands for Robert A. Taft. [This is an eyewitness account—Schlafly was at the  convention.]How the liberal press picked up and spread the smear against Taft can be best described in the words of Allen Drury in ADVISE AND CONSENT:

"All the vast publicity machine that always goes onto concerted action for a liberal cause had gone to work...; an operation so honed and smoothed and refined over the years that none of its proprietors even had to consult with one another. The instinct had been alerted, the bell had rung, the national salivations had come forth on schedule."

Eisenhower had no real knowledge of the tactics used by his supporters to steal the nomination. When he learned of what was happening in Texas, he stated at a press conference: "I myself would never have put in such advertisement in such a paper." This, in effect, constituted a repudiation of all the claims of "dishonesty" and "fraud" made by Henry Cabot Lodge, Sherman Adams and the Eisenhower managers. This, in effect, was an admission by Eisenhower that it was his own supporters who were guilty of fraud in Texas.

In his 1959 book Up From Liberalism.William F. Buckley said about the 1952 fight, in a discussion of the liberalizing effect of indoctrination at Yale:

"I remember in the summer of 1952 hearing it said to an informal audience, by one of the serene-type college officials who are born to assuage the fears of fretful alumni, "Tell me now, do you really think the boys are so radical, when they voted 70 per cent for Eisenhower in the undergraduate preference poll a couple of months ago?" It worked wonders. Unreported finding of the same spring poll: Senator Robert A. Taft won five per cent of the Republican vote. The significant political contest in 1952 was between Taft and Eisenhower, over the question whether the Republican Party should go Right or Left.

In the 1950s, voters were offered a choice of a candidate but not a platform, as Buckley put it—a liberal Democrat, and a liberal Republican. In 1952, the GOP insiders, who favored the status quo, achieved an echo, not a choice. They're trying to do it again.