Sometimes Americans forget what a barbaric society we have in our neighbor to the south. ISIS and other hostile Muslims fill up the medias screen with their headchop activities, but Mexico is not far behind in savagery. In fact, Mexico should be grateful for murderous Muslims who take attention away from Mexican gangsters also employ horrific terror to achieve their goals.

In fact, 1,300 people have been beheaded in Mexico in the years from 2007 to 2011. Mexicans love to celebrate their Aztec ancestors (as one sees in amnesty demonstrations), meanwhile ignoring that the tribe was quite brutal as shown by archaeology.

A tragic reminder of Mexicos cultural violence has been the 43 student teachers who on September 28 attended a political demonstration and then went missing, apparently taken away by police. In searching for the disappeared young men, other mass graves have been found, magnifying the horror.

Time magazine quoted one experts analysis, noting how the Mexican underside has been revealed by the crime (How the Disappearance of 43 Students Has Tested Mexico’s President, October 28, 2014):

“This event gave Peña Nieto a bloody nose,” said George W. Grayson, a professor at the College of William & Mary who studies drug trafficking groups. “It has demonstrated that his attempted security policy simply hasn’t functioned adequately and there are two Mexicos: the modern Mexico that the President embraces, but also the Mexico Bronco – a wild, savage Mexico.”

Below, families of the missing students have demanded more efforts for their relatives to be found. 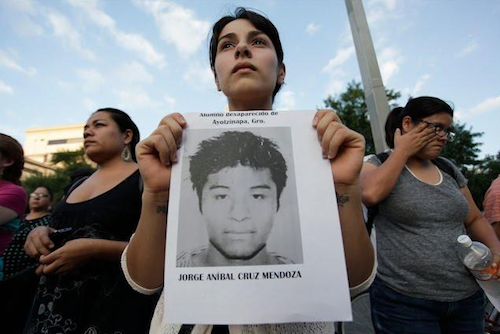 Here in America, we should work to stop the Mexicanization of our nation via diverse immigration and invasion. Mexicans may say they hate the lawlessness at home, but immigrants bring their whole cultural package, including kidnapping for ransom, everyday bribery, deadly drunk driving, violent misogyny and a general criminal-friendly attitude. These are not the immigrants any citizen would choose as a group (although there are some fine exceptions who have embraced American values enthusiastically).

As Ann Coulter remarked the other day, “The country has changed . . . since the 1965 Immigration Act, and not for the better because of millions of immigrants who prefer a big welfare state instead of the Constitutionally limited government envisioned by the founders to protect citizens freedom. And Mexican newbies bring not only a propensity toward big government but also a culture interwoven with crime, violence and corruption. 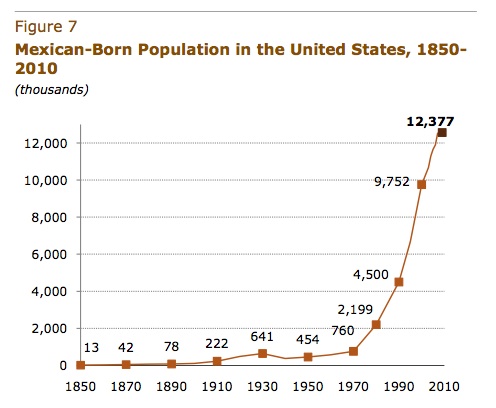 Interestingly, Mexicos Day of the Dead holiday prompted coverage of the case in the American media, although some of the actual explanations were strangely sketchy. (See NPRs mood piece With Mexican Students Missing, A Festive Holiday Turns Somber and the Los Angeles Times emotive A day of too many dead in Mexico.) Say no evil against the diverse!

The Fox Latino report was somewhat more informative about the crime in poisonous Mexico.

Mexican authorities in the troubled southern state of Guerrero are searching yet another mass grave in the hope of finding out what happened to the 43 college students who have been missing since late September. Based on statements from four people arrested Monday, authorities came upon the new location in Cocula, a town about 10 miles from where the students last were seen.

Testing still needs to be done to determine if the new site has the missing students remains.

The discovery of the latest mass grave brings the total number of clandestine burial sites up to 12 around the hills of Pueblo Viejo in the municipality of Iguala, leading many observers to reflect on the long history of institutional violence and corruption that has plagued Guerrero.

“It’s been one of those places where horrible things are going on but you never know what it is,” Adam Isacson, a senior associate for Regional Security Policy at the Washington Office on Latin America told Fox News Latino. “Even before Mexico became one of the most violent places on earth, Guerrero had a very high murder rate.”

The 43 students from a local teacher’s college disappeared after a clash with police in Iguala, about 80 miles southwest of Mexico City. After detaining the students, local police officers allegedly took them to a police station and then on to Cocula, Mexican Attorney General Jesus Murillo Karam said earlier this month.

At some point, the students were loaded onto the back of a dump truck and – apparently still alive – taken to an area outside of Iguala.

For decades, Guerrero has served as a main conduit for drugs moving north into the United States – thanks in part to its access to the Pacific Coast and its overall sparse population – and with it a deep-seated culture of corruption has emerged in the state’s local political offices and police forces. Arrest warrants have been issued for the missing Iguala Mayor José Luís Abarca and his wife, María de los Angeles Piñeda, on allegations that they ordered two local police forces to stop the students from disrupting a political event the day of the disappearance.

Piñeda reportedly has ties to the local Guerreros Unidos gang and dozens of police officers with links to the gang are part of the 56 people already arrested in connection to the incident. An arrested gang leader claimed that Piñeda was “the main operator of criminal activities in Iguala and that the mayor received payments of 2 million to 3 million pesos ($150,000-$220,000) every few weeks, as a bribe and to pay off his corrupt police force.

“Organized crime strategies in the state always seem to involve the mayor and the police chief,” Isacson said. “Sometimes they are even the capos of the gangs.”

Guerreros Unidos could afford to bribe the mayor and local police force because of the windfall profits that they make from growing opium poppies and sending the opium paste to be refined for heroin destined for the U.S. market. The group purportedly made the switch to opium from marijuana after income from marijuana trafficking began to decline, allegedly due to the legalization of the drug in some U.S. states.

While bloody death tolls and ubiquitous violence are nothing new in a country that has seen an estimated 106,000 people killed in drug violence since 2006, the disappearance of 43 college students has shaken the country and spurred widespread protests across the country.

Protesters last week burned down Iguala’s city hall and Guerrero Gov. Angel Aguirre stepped down under heavy criticism of the states handling of the case and its political support of Abarca. Also last week, tens of thousands marched down Mexico Citys main avenue demanding the return of the missing students.

The protests have even extended to New York City, where a group of Mexican-Americans have shown up at the Mexican consulate to urge the government do more to find the missing students and demand that Mexican President Enrique Peña Nieto step down over the growing scandal.

Some experts say that the reason that the students’ case has drawn such national and international attention is because, unlike the mass slayings of drug traffickers or those of poor migrants, these people were middle-class, college students and the memory of the 1968 Tlatelolco massacre – where Mexican forces killed between 30 and 300 people in Mexico City 10 days before the start of the summer Olympic Games – is still embedded in many people’s minds.

“These people were middle class, they were educated kids and people in Mexico City can relate to them,” Isacson said. “When two drug gangs kill each other, sometimes with dozens of people dead, nobody, not even government officials, care because they say they’re criminals.”

“Here this is not the case.”