Diana Washington Valdez, a reporter at the El Paso Times, has been pursuing the story of the horrific serial murders of hundreds of women in Juarez Mexico for years. She has written a book, Harvest of Women, that has angered a lot of Mexicans, who don't want the truth about their culture's corruption and violence to become better known. And of course the killers are particularly unhappy. 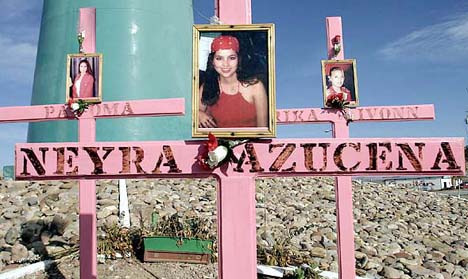 After years of investigation, Valdez believes the women are tortured and murdered "for sport" by men with powerful political connections who get off on sadism and killing with impunity. Her book names names, and she has gotten death threats.

Since 1993, more than 500 girls and young women have been murdered in Juarez. Washington Valdez says about a third of them were sex-murders. "But the important thing here for me — they were not murders committed with the motive of some kind of rape or sexual assault. The objective for many of these murders, the systematic murders as we call them, is really to kill the women. The objective always is to kill the women." ["Women Being Murdered for Sport" - Texas Author Getting Death Threats, WOAI 2/23/07]

The good news is that this human rights travesty is getting overdue attention. The bad news is that Hollyweird has gotten into the act, with leftist do-gooders creating a feature film Bordertown, with the fearless reporter played by Jennifer Lopez (who also "starred" in a memorable South Park episode in which diversity was explored). J-Lo was recently honored with the Artists for Amnesty prize at the film's Berlin premiere. (Hey, why didn't Mexico City host the film's roll-out? Wasn't el Presidente Calderon interested in the spotlight on his lovely country?)

The crew who did venture into Juarez were harassed by police and locals. On the first day of filming, a production assistant was arrested and questioned, their hotel rooms were ransacked, and a camera truck was stripped of ?100,000-worth of equipment. The mayor's response was to tell them that they weren't welcome in town, just across the border from El Paso, Texas. "This is a city out of control," says Bordertown's director Gregory Nava. There's an enormous clash of cultures. It's the only place where the First World and the Third World meet, and that point is radioactive." [J-Lo's Crusade for the City of Lost Girls, Sunday Mirror 2/18/07]

Does this country sound like the sort of place with which we should have closer relations? Build that fence, and soon!