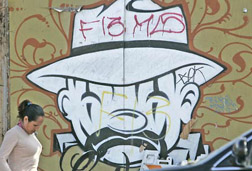 The term "ethnic cleansing" is not a phrase of blogger hysteria over ugly crime statistics, but describes accurately the situation as determined by a Los Angeles court of law: From the Los Angeles Times, 8/2/06, 4 Los Angeles Latino Gang Members Convicted of Anti-Black Conspiracy...

The jury finds that the defendants terrorized African Americans to try to drive them from the Highland Park neighborhood.

Four members of a Latino gang in Highland Park were found guilty Tuesday of unleashing a barrage of assaults and killings to push African Americans out of the predominantly Latino community in northeast Los Angeles.

Today's news downplayed the racial aspect and emphasized the gang-on-gang violence, where innocent bystanders have become victims as well. But the race agenda is part of the territory when gangsters are reconquistas with tattoos.

Authorities said the gang specifically tried to eliminate rival African American gangs in South L.A. and the Florence-Firestone area in an effort to "cleanse" the neighborhood. In doing so, they mistakenly harassed and attacked innocent African American residents, according to the indictment.

More than 60 members and associates of the Florencia 13 street gang were charged with federal racketeering and drug charges. Members of Latino gang charged with race-motivated crimes LA Times 10/16/07]

Letter
A Reader Reports NY Pols Want To Ban Use Of Hate Speech As Evidence In Criminal Cases—As Long As The Hate Speech Is Rap Lyrics!
MORE...
POPULAR TAGS