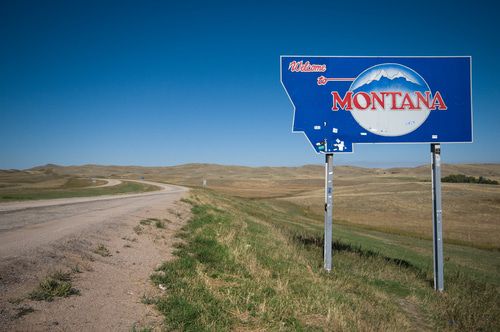 Memo To Trump: In Montana, PRAISE HUGE 2012 IMMIGRATION PATRIOT REFERENDUM VICTORY! (Ignored By MSM, Nullified By Kritarchy—But They're Another Problem)

The news is out that you'll be campaigning in Montana for the third time this mid-term season!  A rally in Missoula next Thursday.  (According to the Great Falls Tribune, time and location are yet to be determined.)  I expect you're aiming to help Republican Matt Rosendale, our state auditor, knock off—electorally speaking!—the incumbent Democrat, U.S. Senator Jon Tester.

That's probably not a bridge too far.  After all, in both of Tester's prior runs—in 2006 and 2012—he won with with less than 50 percent of the vote.  Jon is no giant of the Senate (except in rotundity).

Given your focus on immigration, you'll want to know about the enormous electoral victory here in November 2012 for Legislative Referendum 121 [LR-121].  That was the anti-illegal-immigration ballot measure that won with 79.5 percent—79.5%!!!!—of the vote.

LR-121 was by far the winningest item on our statewide ballot that year, whether candidate or ballot measure.  And it received nearly as many total votes as the headliner candidate races for president, U.S. senator, and governor.

My detailed analysis of the vote is here ...

Astonishing Immigration Patriot Victory In Montana—No Thanks To GOP, Which Ran Away (And Lost)

... in an article that the website's exasperated editor Peter Brimelow punched up some with observations about Republicans' general failure to recognize immigration (and not just illegal immigration) for the electoral gold that it is.

You can still see the amazing county-by-county triumph for LR-121 on page 25 here. It won by a landslide in every one of our 56 counties.

(LR-121 was ultimately mugged by the kritarchy in the usual undemocratic way.  That's another issue. But the amazing vote LR-121 received—revealing the overwhelming opinion of average voters, even though the measure received little coverage or promotion during the campaign—was far more important than what this particular legislation would have achieved if in force.)

So, President Trump, welcome to Montana, the anti-illegal-immigration state!  Live long, prosper, and please focus anew on immigration in the national interest.

p.p.s. Also, did you know that, in 2014, voters in deep-blue-state Oregon defeated driver's licenses for illegal aliens by another landslide?  It's true; see here.