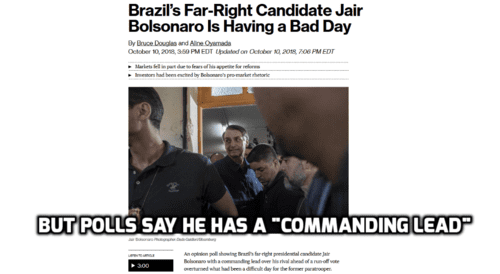 Jair Bolsonaro Has Strong Lead Going Into Second Round

Jair Bolsonaro has a strong lead going into the second round of the Brazilian election. However, he's also facing a judicial investigation into a key aide, which may impact his anti-corruption image.

Bolsonaro opened up a 16-point lead over his rival, Workers’ Party candidate Fernando Haddad, in a Datafolha poll published on Wednesday evening, with 58 percent of vote intentions versus 42 percent. The numbers provided a huge boost for the ex-Army captain after prosecutors announced a probe into a key adviser and Brazilian assets slumped, partly due to Bolsonaro’s lukewarm comments on privatization and pension reform.

The real and Bovespa had surged after Bolsonaro performed strongly in the first round vote on Sunday, but both sank on Wednesday as investors chewed over an interview he gave to local media. In it he nixed the chances of getting pension reform approved this year and limited the scope of privatization in state-run oil and energy companies. In recent days there have been disjointed messages from his campaign team on the urgency of reforms, further raising investor doubts.

Bolsonaro is also facing a full-court press from the international media, emboldened that they forced him into a second round. One of the undercurrents of the media reports is that Bolsonaro has only gotten this far because there has been insufficent censorship to prevent the "wrong" viewpoints from getting out.

From The New York Review of Books:

I spoke to Bolsonaro in 2016 before he voted to impeach [former Brazilian President Dilma] Rousseff. He said the world would celebrate her removal, since he would be helping to stop Brazil from becoming North Korea. Later that day, when he dedicated his impeachment vote to the man who had overseen the torture of Rousseff in her days as a left-wing guerrilla, he became the public face of uncompromising opposition to the politicians who had run the country for over a decade (even though he often worked for them and benefited personally from the privileges bestowed on parliamentarians). And as more and more of Brazil’s political conversation has moved on to social networks, members of a new Brazilian alt-right have been able to spread misleading or outright false information about their preferred leader, Bolsonaro, and their hated left-wing enemies...

[Fernando] Haddad, seen as a capable moderate within the PT [Workers' Party], will face Bolsonaro in the run-off. He has a chance, but his opponent is the front-runner. And even if Haddad wins, the ideology that powered South American dictatorships is back. He would face a radical right in Congress and powerful factions among the population that would view him as illegitimate and likely spread misinformation to undermine him. In the days since Bolsonaro won the first round, he has refused to sign a pledge not to spread false information online. Instead, he claimed, without evidence, that he would have won already if the voting machines had worked properly; and he pledged to “put an end to all types of activism in Brazil.”

It's for this reason I can't take all the talk about "authoritarianism" seriously. There's not a country in Western Europe that has a legitimate government that actually respects free speech and doesn't punish political dissidents. So when reporters are complaining about "authoritarianism," I usually take that to mean "a government that has freedom of speech for people journalists don't like."