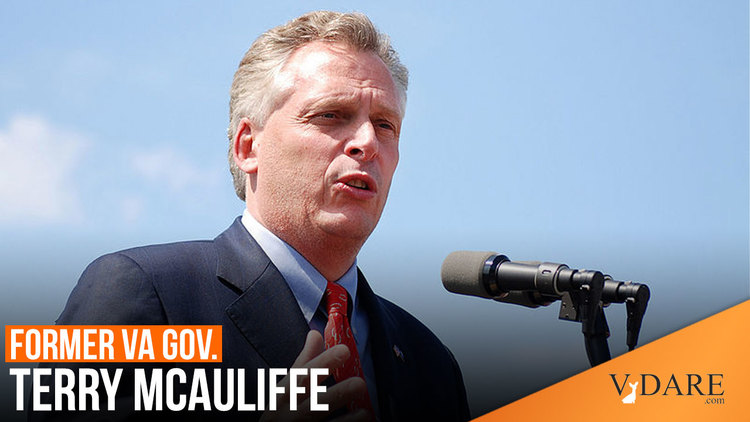 As even Bill Kristol has conceded, demography is destiny. To quote him, "We're running a census every two years as much as an election."

There's an election to see who the new governor of Virginia will be. We call it an election anyway. It’s really a census. We'll find out if Old Virginia has been totally replaced.

It wasn't long ago that Virginia was the reddest of red states. Thanks to mass immigration and the growth of northern Virginia (itself fueled by the growth of the federal government), Virginia teeters on the brink of being another California. Its history is already being retconned as one of shame and disgrace, with the New Virginia built on the ruins of what came before.

Yet in a strange way, Charlottesville did come back to bite McAuliffe recently. It came via a particularly stupid political trick played by "The Lincoln Project," an anti-Trump group that once pretended to be Republican but is now understood to be a standard liberal group. Many Regime Media journalists still call it "Republican," but it's very hard to think they really believe it [Multiple outlets ripped for referring to Lincoln Project as 'Republicans,' by Lindsay Kornick, Fox News, October 31, 2021]. They're journalists though, so one never knows.

The Lincoln Project dressed up five people in white polo shirts and khakis , holding unlit tiki torches. They stood by a Youngkin campaign bus. They were obviously waving the bloody shirt of Charlottesville. Journalists and Democratic staffers breathlessly described them as supporters of Republican candidate Glenn Youngkin. They did this despite one of the supposed white supremacists being black [Do They Really Think We're This Stupid? by Gregory Hood, American Renaissance, October 29, 2021].

Unfortunately for journalists, there are still a few parts of social media that aren’t totally censored. Within a matter of hours, the "white supremacists" were revealed as Democratic activists [Breaking: Tiki torch photo in front of Youngkin tour revealed to be Democrat stunt, by Hannah Nightingale, Post-Millennial, October 29, 2021].

At that point, the people who launched the stunt proclaimed that they were simply tying Youngkin in with the marchers at Charlottesville. One is reminded of an old Internet meme. You notice someone is being stupid but they respond that they were only pretending and so you are really the stupid one. Regime Media dutifully went along with this new Narrative, sticking with the party line that the Lincoln Project is composed of Republicans and that the real focus should be on Youngkin, Donald Trump, and Nazis.

"Today's demonstration was our way of reminding Virginians what happened in Charlottesville four years ago, the Republican Party's embrace of those values and Glenn Youngkin's failure to condemn it," the Lincoln Project said in a statement.

On Friday morning, five people wearing white shirts, khaki pants, dark sunglasses and baseball caps and carrying tiki torches approached Youngkin's campaign bus. They reportedly said, "We're all in for Glenn," and remained in front of the bus during his campaign event.

Youngkin said the demonstrators were sent by his opponents. The Democratic Party of Virginia denied involvement.

Trump, who was president during the Aug. 11, 2017 "Unite the Right" rally, was criticized for initially saying there were "fine people on both sides" of the dispute between neo-Nazis and their opponents at the rally.

[Group of anti-Trump Republicans was behind tiki torches in Virginia campaign, by Kanishka Singh, Reuters, October 29, 2021].

Regime Media also furthered the Narrative that the McAuliffe campaign had nothing to do with this stunt. Of course, as even National Review noted, McAuliffe campaign workers initially said that the presence of these random people was "disqualifying" for Youngkin. McAuliffe’s campaign was cynical or stupid enough to take it seriously [McAuliffe Should Be Held Responsible for Tiki Torch Stunt, Because His Campaign Thinks Candidates Are Responsible for Supporters, by Philip Klein, National Review, October 29, 2021]. Therefore, given that it was a hoax, McAuliffe’s campaign essentially disqualified itself. No one who matters will hold them accountable for it, though, so it doesn' matter.

Rep. Eric Swalwell, a member of the House Intelligence Committee, also ran with this story initially [Update: "The Lincoln Project" Takes Credit For Posing As Tiki-Torch Nazis At Glenn Youngkin Event In Charlottesville, by Tim Hains, RealClearPolitics, October 29, 2021]. He apparently really believed it, or he’s a liar. If it’s the former, it’s no wonder his government can’t win a war.

It would be interesting to know if the McAuliffe campaign was actually working with the Lincoln Project and knew about the stunt. It would make the campaign’s claim that it “condemned it in the strongest terms" very hollow ['Disgusting and distasteful': Liberals turn on Lincoln Project over tiki torch stunt against Virginia Republican, by Nathan Place, Independent, October 30, 2021]. I doubt we'll get much follow-through from the Regime Press.

Yet even if you could produce a smoking gun, it might not even matter. Most people don't read past the headlines. Thousands saw the initial headlines about "white supremacists" supporting Youngkin. After the hoax was exposed, the headlines still said that a "Republican" group had posed people as "Nazis" in a political stunt.

We can't even say with certainty that the Lincoln Project's stunt failed. Most people might just vaguely remember something about Republicans and Nazis. Many liberals probably don’t even know that the hoax fell apart. Both media Narratives, the first about the hoax and the second about the "Republican" stunt being exposed, served to reinforce this idea that there are Nazis everywhere who are vaguely associated with Republicans.

These crude racial appeals reflect the unfortunate truth that modern politics is not about ideas or competence but turning out your tribe. McAuliffe understands this.

In a speech to Virginia Latinos, he bluntly declared that they were 10.5% of the population and they should get to work making themselves 11% [McAuliffe tells Hispanic voters to 'get busy, get yourself to 11%' of population, by Christopher Hutton, Washington Examiner, October 28, 2021]. It’s a flat endorsement of replacement migration and racial head-counting. Such a statement, if applied to whites, would be considered not just disqualifying but morally obscene. A similar statement applied to any other racial group is taken as perfectly normal by the Regime Media, perhaps even praiseworthy.

Conservatives are calling McAuliffe’s statement "bizarre," but it's just political common sense. Elections are fundamentally about turning out the demographics that support your candidate. That's why gerrymandering exists. Republicans may pretend to oppose “identity politics,” but they understand it when it is time to draw up congressional districts. When it comes to communities or nations they really care about, people who support immigration for others suddenly become immigration patriots.

McAuliffe is spending the final days of the election trying to turn out black voters [McAuliffe closes by asserting record of progress – and Trump threat, by Michael Martz, Richmond Times-Dispatch, October 30, 2021]. He’s right to do so. Every election, there’s a claim that this will be the time blacks refuse to vote for the Democrat in overwhelming numbers, but every election, the results are essentially the same. Youngkin’s pledge of support for Historically Black Colleges and Universities, support he would never give whites who might actually vote for him, will do little to appease this constituiency.

Needless to say, McAuliffe lives in a wealthy northern Virginia suburb with relatively few non-whites. Of course, so does Youngkin [Political opponents, yes, but Virginia's gubernatorial candidates share a taste for pricey Zip codes, by Paul Schwartzman, Washington Post, July 26, 2021]. They both come from the same class. Youngkin would hardly be a revolutionary change as governor.

Nonetheless, he’s run a skillful campaign in the face of nigh-unanimous media hostility. McAuliffe has run a terrible campaign. It may not matter. If Virginia's demographics have sufficiently shifted, the Old Dominion will be like California or Baltimore, a "post-political" area. Basic questions about the way the area is being governed simply won't matter. It’s like wondering if a black city run uniformly by Democrats would ever decline so far that voters would consider a different party. It’s too absurd to even consider.

Youngkin may yet squeeze out a victory, though Democrats already lead in early voting [Virginia's governor's race remains a dead heat in polls, but Democrats lead in early voting, by Annika Kim Constantino, CNBC, October 29, 2021]. If Youngkin scores an upset, unless he takes measures to change the state's demographics, it may be the last meaningful election.

McAuliffe's replacement rhetoric accurately describes what will happen if mass immigration continues. If McAuliffe wins the election, it will show that Virginia has been so transformed that even an incompetent candidate, an extreme program, and a cartoonish blunder the weekend before the vote wasn’t enough to change anything.

In the event of a McAuliffe victory, whichever actual Virginians are left in the state need to start looking for an exit, perhaps by joining their mountainous western neighbor. It’s clear that the once-and-possibly-future governor doesn’t want them in his state anyway.