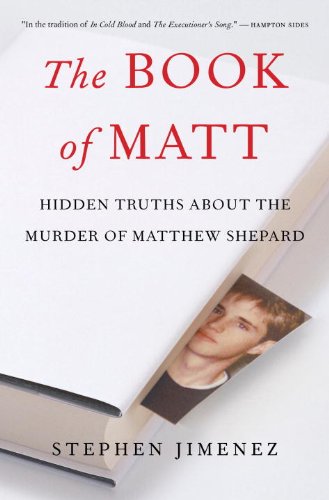 …an attorney and specialist on anti-Semitism, hate studies and extremism for the American Jewish Committee

This notes that this famous killing, which was used to ramrod through the Hate Crimes Bill of 2009, was seriously different from the version propagated by the MSM

Steve Jimenez’s newly released nonfiction book, “The Book of Matt: Hidden Truths About the Murder of Matthew Shepard” (Steerforth Press, 2013)… makes a compelling case that this horrific murder was not a hate crime at all.

The story reported in the media, and largely presented at trial, was a simple one. Shepard was in the Fireside Lounge in Laramie, Wyoming, when he met two young men, Aaron McKinney and Russell Henderson. Supposedly Shepard told these strangers he was gay. They left the bar with him, then pistol whipped and tortured him, and left him to die tied up to a fence at the end of town. They allegedly did this because Shepard was gay…

But McKinney and Shepard were not strangers. They had many friends in common, and had socialized with each other. And they had an even deeper history. Both were dealing (and using) methamphetamine, and as such were business rivals. McKinney was also bisexual, and had had sexual relations with Shepard.

VDARE.com took a deep interest in the 2009 legislation, which bestowed long-sought legal privileges on Jews and various other ethnic groups by including homosexuals (while,according Attorney General Holder, explicitly withholding them from Whites and Christians).

This was because we saw the likelihood that, as Paul Craig documented for us, the Record Shows "Hate Crimes Prevention Bill" Will Suppress Speech specifically on immigration. Senator Feinstein actually gloated about this outcome in Committee.

Four years on, it is clear that we were right. The terms “Illegal Alien” “Anchor Baby” and of course “Wetback” are being frozen out of public discourse and immigration is increasingly difficult to oppose in polite conversation.

The main Immigration Restraint and Conservatism Inc outfits were contemptibly silent in 2009, although National Review, in familiar style, did publish a fine essay after the bill bacame law.

Kenneth Stern’s answer to his own question, sadly, appears in effect to be that the end justifies the means

A very thorough account of MSM mendacity in the case (by an indignant Wyoming gay!) is The “Hate State” Myth by Robert O. Blanchard Reason May 1999