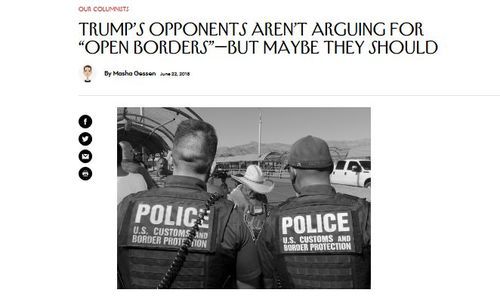 Masha Gessen In The NEW YORKER: "Trump’s Opponents Aren’t Arguing for 'Open Borders'—But Maybe They Should"

… During the weeks of controversy surrounding the policy of separating families at the border, the Trump Administration has succeeded in framing the debate as one between supporters of enforcing immigration law and supporters of open borders. When he cited the Bible as justification for the family-separation policy, Attorney General Jeff Sessions also used it to attack his imaginary opponents: “I don’t think there is a scriptural basis that justifies any idea that we must have open borders in the world today.” At a rally in Minnesota on Wednesday, Trump declared, “The Democrats want open borders.”

Sadly, this is not true: no voice audible in the American political mainstream is making the argument for open borders. Since Trump’s apparent concession on the issue of separating families, two prominent commentators on the right have argued for fortified border security, and even for the wall itself; some pundits have encouraged Democrats to move further to the right on immigration. No counterargument has emerged from the left. The existence of borders, and the need and right to police them, are among the unquestioned assumptions in the conversation.

Establishment personages like Masha Gessen, former head of US government propaganda activities in Russia, don’t want to get stuck having to explicitly defend Open Borders because it’s obviously an insane policy (look at what percentage of Puerto Ricans now live in the Fifty States). So Masha tries out various passive-aggressive formulations that allow her to back off if seriously challenged.

Even more common is not defending Open Borders, just demonizing anybody or any mechanism for partially closing borders. Hence, anti-anti-Open Borders sentiment is now the conventional wisdom, while defending the existence of borders is seen as hate-filled extremism. For a white gentile to have an opinion on who should not be let in is tantamount to Discrimination and thus unthinkable.

And more and more Establishment voices are coming out as more or less Open Borders advocates. For example, NYT neoconservative columnist Bret Stephens [Email him] recently called for Open Borders for everybody except people he, personally, dislikes:

I’ll be accused of wanting open borders. Subtract terrorists, criminals, violent fanatics and political extremists from the mix, and I plead guilty to wanting more-open borders. Come on in. There’s more than enough room in this broad and fruitful land of the free.

Outside the political mainstream, activists and academics have questioned the certainty that borders must be protected, or that those who live within the borders are automatically entitled to enforce them. In a recent academic collection, Kieran Oberman, a political theorist at the University of Edinburgh, makes the case for a human right to immigration. He argues that the right to enter a country and spend any amount of time there—though not necessarily the right to obtain citizenship—flows naturally from universally declared human rights to freedom of movement, freedom of association, and freedom of occupational choice. In an interconnected world, it is often necessary to cross borders for personal, professional, and political reasons. …

Sarah Fine, a political philosopher at King’s College, in London, who is working on a book on the “right to exclude,” or the right of states to keep people out, has raised another provocative argument. If democracy is a system that guarantees the right of the governed to participate in the governing process, then democracy confined to protected national borders contains an internal contradiction. Those who are banned from entering a country are, in effect, governed—the Central American mother at the border whose child is ripped away from her by U.S. Border Patrol agents is being governed in the extreme—yet they have no say in the rules, or in the election of those who make them.

It’s obviously a betrayal of the principles of American democracy that people who aren’t American citizens and who don’t live in America aren’t even allowed to vote on whether they should be allowed to move to America. It would be like that homeless guy you step over on the sidewalk outside your house not having a say in whether he gets to move in with you. Well … no, it’s not like that at all. But you know what I mean.

In contrast, Russian Facebook ads are a violation of American sovereignty that justifies going all DEFCON 1 on Putin. (To Gessen’s credit, she’s less nuts about about Russian social media war than many other pundits.)

Neither Oberman’s nor Fine’s lines of thought are arguments for open borders, though perhaps they should be. …

Masha Gessen, a staff writer, has written several books, including, most recently, “The Future Is History: How Totalitarianism Reclaimed Russia,” which won the National Book Award in 2017. 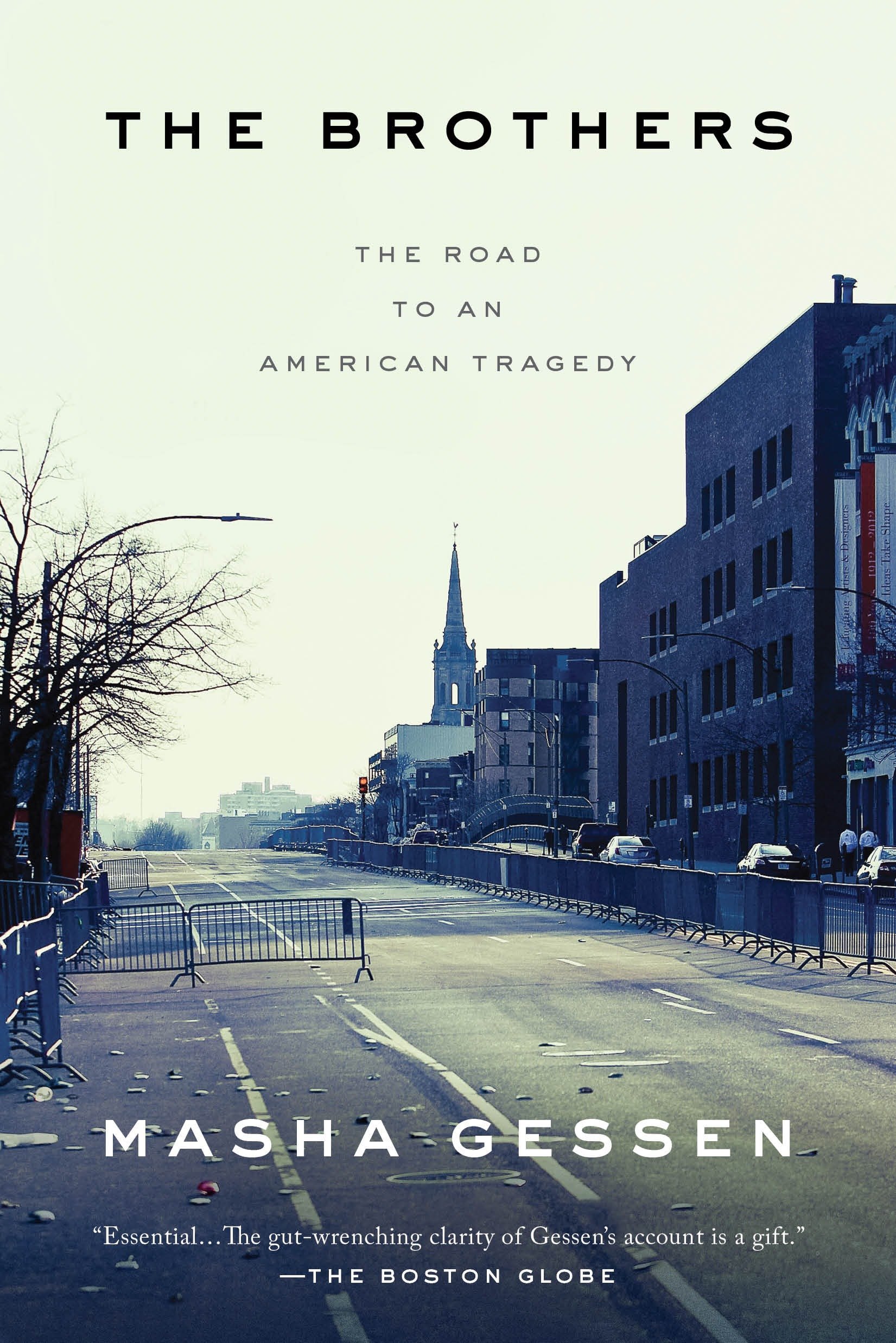 Of course, letting anybody from anywhere move to America anytime they feel like it is hardly the end of our obligations to the other seven billion people on Earth. Once they get here, they will need elaborate government programs, special privileges, and veto powers over American culture to feel at home. For example, Ms. Gessen wrote a book, THE BROTHERS: The Road to an American Tragedy, about how America let down the Tsarnaevs, the Boston Bomb Brothers. From the review in the Washington Post:

… Gessen contends that the United States was as responsible as the misguided youths for the explosions near the marathon finish line that killed three and injured more than 260.

Similarly, the Soviet-born Ms. Gessen feels the need to scold Americans incessantly in famous American periodicals over how America is just not living up to her expectations.

In fact, what immigration patriots should do is create a new federal immigration bureaucracy staffed with otherwise unemployable graduates of anthropology, cultural studies, comparative religion, ethnic studies, and psychology majors to review all applications for asylum and immigration from the perspective of whether the United States is too racist, culturally insensitive, religiously bigoted, capitalistic, etc. for the poor innocent foreigner to have a reasonable chance to not be offended by having to live in America.

It would be called the Federal Bureau for the Protection of The Other.

It would be given a veto over the immigration of any foreigner likely to suffer insensitivity from Americans, such as children asking to touch his or her hair, or Americans getting confused over which country he or she is from — e.g., the only way to prevent insensitive Americans from wounding the psyche of Iraqi newcomers by confusing them with Iranians and vice-versa is to not let in any more Iraqi and Iranian potential victims of nativist ignorance. The same goes for Eritreans and Ethiopians.

For example, how punching down of me to have once asked the thin-nosed beige skinned ladies in elaborate dresses in Uptown if they were Ethiopians, and they were offended because they were Eritreans; and Ethiopians, who live in the same block in Uptown in Chicago so they can shop at the Eritrean/Ethiopian grocery store, are their mortal enemies. How much better these poor Eritreans would have been if instead of being in mindless Uptown they had been home with their cultural peers who understand that all Ethiopians must die and other unquestionable verities of Eritrean culture.

Clearly, the current immigration bureaucracy is overly infected with low-brow ideas of American exceptionalism. We need to hire an entire bureau of leftist grad students who understand how America crushes the innocent dreams of The Other, and we will pay them bonuses for protecting The Other by not letting The Other into our country. This bureau of Howard Zinn and Masha Gessen fans should not be allowed to initiate or approve immigration applications, but it should be allowed to veto applications on the grounds that hateful America doesn’t deserve these immigrants.

For example, the Tsarnaevs and Todashev were just carrying out ancient Caucasus traditions of berserker raids upon enemy tribes and ritual assassinations of Jews that go back to the hashish-besotted Assassins of the Caucasus observed by Marco Polo. Back home, this tradition is deep rooted and honored, but in ignorant, insensitive America, few seem to grasp that they were just behaving like good Chechen  lads down through the centuries. How much happier they would have been staying home in their native cultural milieu where they would have been afforded the dignity attaining to the perpetrators of acts of carnage.

What America needs is a giant bureaucracy stuffed with leftist liberal arts majors who are getting salary, health care, and pension far beyond what they can earn in the private sector whose only mission is to protect would-be immigrants from being traumatized by exposure to hate-filled Americans by not letting them in to the country.