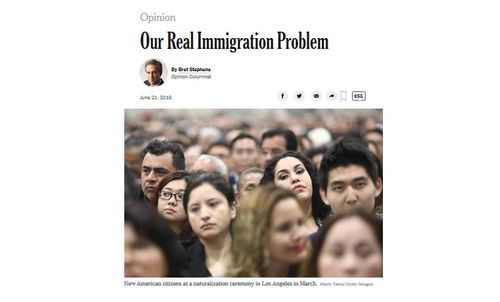 …America is vast, largely empty and often lonely. Roughly 80 percent of Americans live in urban areas, covering just 3 percent of the overall landmass. We have a population density of 35 people per square kilometer — as opposed to 212 for Switzerland and 271 for the U.K.

We could use some more people. Make that a lot more.

Obviously, all those potential immigrants out there around the world are just itching to move to the middle of nowhere rather than, say, the Los Angeles Megaloplex. After all, immigrants to Australia always pass up expensive Sydney for the elbow room of Alice Springs. And whoever heard of an immigrant to Canada wanting to live in overcrowded Vancouver when he could move to Medicine Hat?

And America has lots of laws and mechanisms for forcing immigrants to live in underpopulated places rather than along side the 101 freeway? Right? I’m sure we must …

… America’s immigration crisis right now is that we don’t have enough immigrants.

First: The U.S. fertility rate has fallen to a record low. In May, The Times reported that women “had nearly 500,000 fewer babies than in 2007, despite the fact that there were an estimated 7 percent more women in their prime childbearing years.”

And of course, the low native fertility rates in immigrant-thick places in America have nothing to do with immigrants bidding up housing costs, bidding down wages, and stressing public schools.

… Third: The Federal Reserve has reported labor shortages in multiple industries throughout the country. That inhibits business growth. Nor are the shortages only a matter of missing “skills”: The New American Economy think tank estimates that the number of farm workers fell by 20 percent between 2002 and 2014, accounting for $3 billion a year in revenue losses.

What Mr. Stephens  [Email him] is trying to say is: Crops are rotting in the fields. Why can’t you people grasp the cataclysmicness of that?

Fourth: Much of rural or small-town America is emptying out. In hundreds of rural counties, more people are dying than are being born, according to the Department of Agriculture. The same Trumpian conservatives who claim to want to save the American heartland from the fabled Latin American Horde are guaranteeing conditions that over time will turn the heartland into a wasteland.

Raj Chetty’s 2015 study of the best places economically to raise a family if you are working class was dominated at the top of the list by heartland rural counties, often with declining populations due to increase farm productivity. In contrast, the bottom of the list as the worst places to raise a family economically included many fast-growing counties with big Hispanic influxes, such in the Carolinas.

Fifth: The immigrant share (including the undocumented) of the U.S. population is not especially large: About 13.5 percent, high by recent history but below its late 19th century peak of 14.8 percent. In Israel, the share is 22.6 percent …

And Israel’s immigrants are very diverse. Some are from Minsk, while others are from Pinsk.

Finally, immigrants — legal or otherwise — make better citizens than native-born Americans. More entrepreneurial. More church-going. Less likely to have kids out of wedlock. Far less likely to commit crime. These are the kind of attributes Republicans claim to admire.

… If anti-Semitism is the socialism of fools, then opposition to immigration is the conservatism of morons.

Only complete morons find anything funny about the horrifying fact that CROPS ARE ROTTING IN THE FIELDS.

… In a nation of immigrants, it’s un-American.

I’ll be accused of wanting open borders. Subtract terrorists, criminals, violent fanatics and political extremists from the mix, and I plead guilty to wanting more-open borders. Come on in. There’s more than enough room in this broad and fruitful land of the free.

And if you find anything dubious about Mr. Stephens’ highly intellectual arguments, such as his raising awareness of the Farm Worker Shortage, then you are a moron.