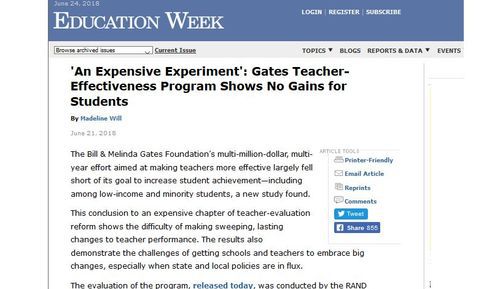 To Bill Gates’ credit, he periodically announces that some education reform fad boondoggle he has financed has failed empirically. For example, in the 2000s he dropped a huge amount of money on “small learning communities,” but then in 2009 came the news:

And now, from Education Week:

‘An Expensive Experiment’: Gates Teacher-Effectiveness Program Shows No Gains for Students
By Madeline Will
June 21, 2018

This conclusion to an expensive chapter of teacher-evaluation reform shows the difficulty of making sweeping, lasting changes to teacher performance. The results also demonstrate the challenges of getting schools and teachers to embrace big changes, especially when state and local policies are in flux.

The evaluation of the program, released today, was conducted by the RAND Corporation …