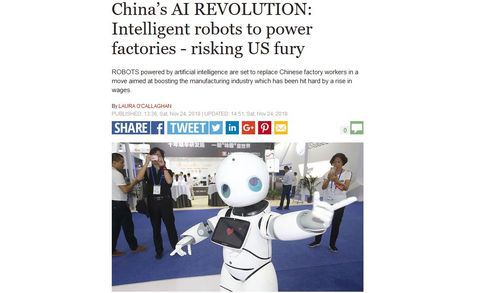 Don't look for much acknowledgement from the Main Stream Media but President Donald Trump is quietly winning the trade war against China.

President Donald Trump is succeeding in making China pay most of the cost of his trade war.

That’s the conclusion of a new paper from EconPol Europe, a network of researchers in the European Union. U.S. companies and consumers will only pay 4.5 percent more after the nation imposed 25 percent tariffs on $250 billion of Chinese goods, and the other 20.5 percent toll will fall on Chinese producers, according to authors Benedikt Zoller-Rydzek and Gabriel Felbermayr.

The trade dispute between the U.S. and China is showing slim hope of abating as the leaders of the two nations prepare to meet in Argentina this month. According to Zoller-Rydzek and Felbermayr, the tariffs will do what Trump has longed for: They will cut American imports of affected Chinese goods by more than a third, and lower the bilateral trade deficit by 17 percent.

[China is paying for most of Trump's trade war, research says, by Xiaoqing Pi, Bloomberg, November 19, 2018]

The upcoming trade talks are unlikely to lead to an agreement according to most observers. [This week in Trumponomics: Expect a disappointing meeting with Xi, by Rick Newman, Yahoo News, November 23, 2018]

However, in the long term, China is likely to change the equation by switching to automation and artificial intelligence.

The machines which are capable of making, assembling and inspecting goods on production lines have already been rolled out, with one factory laying off 30 workers to make way for the robots. The robots were displayed at China’s Hi-Tech fair in Shenzhen earlier this month, an annual event which showcases new development ideas with the aim of driving growth in a number industries. But the news has annoyed Washington as it is expected to put international competitors at a disadvantage, as the two countries’s bitter trade war continues to escalate.

Ultimately, the future is likely to belong to whatever nations can make the switch to automation best. The old Communist motto was that capital relied on labor, but in today's dysgenic world, it's not that we have masses of the unemployed, we have masses of the unemployable. What's more, the drift back to left-wing economics means each low-skilled worker becomes another potential liability both to a company and to the country. [Amazon's European workers go on strike for Black Friday, by Chris Mills Rodrigo, The Hill, November 23, 2018]

What is clear is that the United States of America, of all places, does not need cheap labor. This country certainly does not need to import tens of millions of low-skilled workers when these kinds of jobs are being replaced by automation. Importing a hostile, unemployable helot class is the ultimate in preventable evils.